Beauty comes in all sizes

Monica Strouder is no Calista Flockhart.

Strouder, a data engineer at MCI WorldCom and reigning Plus USA Woman, believes size does not determine a woman’s worth.

“Women just need to be comfortable with themselves,” said Strouder. “Society perpetuates this myth that thin is healthy and that’s not always the case. There can be a balance between being big and being healthy. Can I run 20 miles? No, but I don’t know many people that can.”

The prevailing fit or fat perception is what kept Strouder from entering the world of beauty pageants — at first. After carting her son around the continental United States for 11 years to keep pace with her military husband, the last thing she had in mind was becoming a role model for heavier girls and women.

At a friend’s urging, Strouder went to a screening for models of fuller dimensions.

“I went to a ‘cattle call’ to see if I was model material,” she said. “The company was looking for plus size models. I always wanted to do it but I was too big. Ten, 12 years later I decided it was time to start doing things I wanted to do.”

Strouder’s road to notoriety began with a promotional video at Universal Studios. Radio commercials came next. While surfing the Internet, Strouder discovered a nationwide competition emphasizing personality and attitude over physical features. No swimsuit parades allowed. Impressed that the contest did not have any restrictions on age or weight, she decided to enter.

“I was enthralled with just getting there and participating,” said Strouder.

Applicants were required to submit an essay on why they felt they should win. Poise, personality and prettiness were the main areas judges critiqued.

Included with the pageant was a convention, which focused on empowering larger women. During the span of a weekend, seminars, lectures and workshops addressed topics such as health, wellness, fashion, beauty and self-esteem.

Among those speaking at the conference were a nurse, model, cosmetics representative, talent agent and a triathlon runner — all plus size — who spoke about surmounting obstacles because of weight.

“Parents need to change children’s opinions about what they see on TV,” said Strouder.

A size 22, the 32-year-old, 275-pound Strouder never envisioned being in the limelight.

“The whole thing was a phenomenon; it was inspiring,” she said. “These women were passionate about self-acceptance. They were all strong, confident, big, beautiful girls.”

Sporting the crown gives her the liberty to address other women about self-esteem and positive affirmation.

Other perks included a diamond ring, $5,000 worth of clothes and prizes, $1,000 cash and of course, a tiara. Endorsement opportunities have presented themselves as well.

Seizing the crown has been a boon for her and her husband Tim’s mobile computer troubleshooting business, Strouder Enterprises, based out of their Southside home.

A techno-junkie, Strouder recently earned a degree in information sciences from the University of Phoenix. She’s also worked as a business analyst, administrative assistant and property manager.

A tomboy in her youth, the Illinois native was captain of her school’s volleyball, softball and basketball teams. In between work and play, Strouder delights in a Stephen King novel or episodes of “Will & Grace.” Currently, she keeps active through her participation in the scuba diving club, the Scubanauts.

“I was never thin, but I was not this same weight 10 years ago,” she recalled. 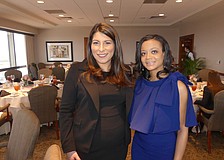 Panel looks at role of women in the law

It's only skin deep