"The Best Little Whorehouse in Texas"

Raunchy, racy, foul-mouthed fun. If you’ve seen the movie version of “The Best Little Whorehouse in Texas,” the FCCJ Artist Series presentation at the T-U Center is guaranteed to raise an eyebrow. Strong language, compromising scenes and plenty of skin make this performance more risque than versions you may have seen in the past. But it’s all in good fun and none of it is out of place, though don’t bring the children to this steamy version of the Broadway classic.

Based on the true story of the Chicken Ranch brothel outside La Grange, Tex., which survived over 100 years while the authorities looked the other way, “The Best Little Whorehouse in Texas” has been an audience favorite for over 20 years. Ann-Margret headlines as Mona Stangley, the strict yet compassionate madam, who acts as matriarch to her “employees” while maintaining rigid order. The Chicken Ranch had been an underground state treasure (nudge nudge, wink wink) for everyone from college students to state legislators until community watchdog Melvin P. Thorpe (Rob Donohoe) exposes its scandalous ways and local sheriff Earl Dodd’s (Gary Sandy) inaction. Looking and sounding suspiciously like an evangelist-turned reporter, Thorpe shows up on the streets of La Grange snooping around with his television crew where he is encountered by the sheriff. Dodd launches into a verbal assault on Thorpe so foul and guttural it’s capable of making sailors blush and babies cry — all of it caught on camera and broadcast far and wide. From there it only goes downhill as Dodd is caught in a maelstrom of political backpedaling as previously sympathetic leaders bow to public pressure. All of which is compounded by the fact that he’s got a soft spot for Miss Mona.

Long sought after for the role of Mona Strangely, Ann-Margret is a capable stage performer, considering this is her first foray into theater. A decorated film actress with credits dating back to Bette Davis days, Margret is certainly convincing as a matriarchal Mona Strangely, but her inexperience at stage acting makes her appear a little rigid at times. Although she did not detract from the production, the star of the show did not steal it. That decoration goes to her stage counterpart, Gary Sandy. For those who have seen the movie, Sandy makes Burt Reynolds look like a choir boy as the rough and crusty Sheriff Dodd. Of particular note, Sandy lets the foul language fly like buckshot through a road sign, making his Dodd performance convincing and spirited compared to other tamed-down incarnations. From the moment he takes the stage midway through the first act, Sandy grabs the show and runs with it as the cantankerous, rootin’ tootin’ old-time sheriff who clearly isn’t up the task of handling a delicate, wide scale public issue with political ramifications. Second billing goes to Ed Dixon, who appeared briefly as the governor of Texas. Slippery as a wet tomato seed, Dixon’s side-stepping as reporters tried to pin him down had the audience in stitches. Rob Donohoe did a dutiful job as Melvin P. Thorpe, but didn’t bring the over-the-top charismatic performance the role requires of and evangelical figure. All together, it was a fine production marred only by a few audio miscues by the production crew. Still, it provides your money’s worth in raunch.

Four garters out of five

WHEN: Eight performances through Sunday.

Getting ready to roar at T-U Center 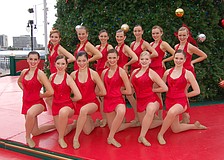 The season of entertainment