Three men sit in a Ready4Work classroom. Cups of coffee linger on the corners of their desks. Framed posters line the walls, offering words for thought: “Vision,” “Integrity,” “Success,” “Attitude.”

The dry erase board reads:

“Frustration - no money no employment”

These men have a lot in common. They have written resumes and filled out job applications. They have gone through mock-interviews. They have new suits, transportation to real interviews and mentors. And not long ago, all three men were in prison.

Kevin Gay, president of the Ready4Work prisoner reentry program, enters the room. He quickly learns that one of the men has been fired from his job as a collection agent.

“So you’ve made a mistake?” Gay asks.

“So now you’re moving on to the next thing?”

If they can’t find more funding, programs like Ready4Work won’t be able to provide recently released convicts with the support that helps them stay out of jail.

In 2004, 36 percent of the 36,831 inmates released from Duval County prisons were arrested again within a year, according to the Jacksonville Sheriff’s Office Department of Corrections. Programs like Springfield-based Ready4Work try to reduce that number, or what’s known as the recidivism rate.

The U.S. Department of Labor’s Center for Faith-Based and Community Initiatives gave the Jacksonville operation money to develop a national model program in 2003. Those funds run out in October.

Ready4Work is exploring both private and public funding options to fill their budget gap; a total of $700,000 is needed for the program to thrive and expand, Gay said.

The likelihood that the City will provide funds for Ready4Work isn’t great, according to Michael Hallett, chair of the University of North Florida’s criminology and criminal justice department. He said most Florida government has shied away from funding prisoner reentry programs.

“These types of programs are very common in other places around the country,” said Hallett. “It’s just that in Florida, fewer and fewer resources are being given over to them. The emphasis has been on law enforcement and corrections.”

Hallett said prevention and intervention efforts like Ready4Work are key components to reducing crime. Jacksonville’s need for crime reduction has been recognized by the Florida Department of Law Enforcement, which has named the city Florida’s murder capital for the last six years.

“Nationally, over 70 percent of homicide offenders have prior records,” said Hallett. “Ex-offenders walk back into a community from prison with nothing to return to other than their old lifestyles. Re-entry programming is critical for helping inmates make the transition from a very closed and sometimes isolating society to the community at large.”

As he neared his August 2004 release, Brown said he was worried about finding a job. He’d been in and out of jail since his first arrest as a teenager. He usually worked temporary factory jobs, Brown said, hoping that employers would keep him after a 90-day background check revealed his convictions. They never did.

Brown said he saw a Ready4Work flier in the prison and took it as a sign. Caseworkers from the program spread the word about Ready4Work inside corrections facilities, inviting any prisoners with three months or less time remaining to sign up.

After a few weeks of classes, Brown started working at a deli for $6.50 an hour. Nearly two years after his release, Brown earns $10.50 an hour plus overtime pay installing sprinkler systems. He pays child support and visits his daughter regularly. He lives with his youngest son, 7 month-old Leonard.

“I think this is the longest I’ve ever been out of jail,” said Brown. “I had to break that cycle of going back to jail, back to jail ... Jail helped me because it gave me time to think about what I wanted. Then, that flier got put up.”

“I didn’t have any confidence in myself then,” said Brown. “Now, if I had to get another job, it seems too easy.”

The program screens participants to make sure they’re serious about changing their lifestyles. If one of them arrives a minute or two late to class, he gets locked out.

“Out of 100 people, there are maybe 20 we feel are ready,” said Gay of the screening process. “We don’t want any surprises, somebody who’s a mass murderer. When we’re done, they truly are ready for work – so employers don’t have to roll the dice.”

More than 100 companies have agreed to hire Ready4Work participants. Brown’s caseworker, Joyce Johnson, said he continues to come to class to encourage others with his success.

The cost of prevention

It costs about $54 a day to imprison an offender in Duval County, according to Gordon Bass, JSO’s director of corrections. That adds up to almost $20,000 to hold one prisoner for one year. Right now, Bass said Duval County has about 3,000 people in jail, with a total of 50,000 arrests per year.

“From a taxpayer’s perspective, it’s far more cost-effective to prevent a crime than to punish it through incarceration,” said Hallett. He said health care, food and clothing costs, buildings and nonstop staffing all add up to make incarceration the most expensive – and arguably, least effective – method of crime reduction.

Programs like Ready4Work can have an impact on the number of ex-offenders returning to jail, Bass said, especially if they’re combined with programs that address needs like mental health and housing. Some of these nonprofit groups work together. Ready4Work, for example, is a division of Operation New Hope, which helps low-income people repair their credit and buy affordable homes.

“It (Ready4Work) keeps ex-offenders gainfully employed instead of in jail and using taxpayer’s money,” said Bass. “And from a personal aspect, you’ve helped change a life. You’ve stopped someone from going back out on the street.”

Brown said he’s optimistic about the future. With the help of Operation New Hope, he plans to repair his credit and buy a home. He said his children have motivated him to work seven days a week to pay off his bills.

Without Ready4Work’s services, Brown said he still would have looked for legal work. But he added that Ready4Work gave him the skills needed to truly move forward with his life and career.

“The classroom might be gone, but it will still be in me,” said Brown. “This class got me focused. It kept me going ... With my kids, I’d still be trying hard. But I’d probably still be at a standstill.” 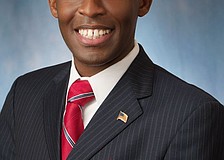 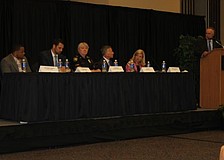