Peter Racine has the kind of job that would make anyone popular.

As president of the Jacksonville Jaguars Foundation — the team’s philanthropic arm — he gives away signed footballs and home game tickets from the team, as well as $1.5 million in grants each year to youth groups and veterans’ programs.

“I’ve learned I have to be careful about what I ask (our grant recipients) for, because they always give you what you want,” Racine said. “I once got a postcard from Girls Inc., and I said, ‘I love this! Do you have a poster of it?’ The next thing I knew, this poster was on my desk and the lady was very proud to say, ‘I took it right off the wall from the executive director’s office!’”

Fortunately, Racine seems to lack the ego necessary to abuse his popularity.

He keeps turning the conversation away from himself and instead, shares an encyclopedia’s worth of knowledge about the ways the Jaguars helps the community.

First on the list is the Veterans Resource Center, a new city project assisted by a $1 million partnership from the foundation, which helps veterans transition back to civilian life.

There’s Honor Rows, a program where children earn seats to Jaguars games by completing community service and self-improvement goals; and Honoring Our Troops, which provides game tickets, lunch and T-shirts to active-duty military families before and after deployment.

Racine leads a department of five in directing the team’s philanthropy and community outreach off the field. It’s a job that demands he be an expert on who’s helping people in Jacksonville.

“I get to do what is also my personal mission — to engage, encourage and connect individuals and organizations with resources they need to make a better world,” he said. “That’s a great job, and I get to do it every day.”

Racine’s profession as a do-gooder began long before the Jaguars. He earned his master’s degree in theology, specializing in pastoral ministering and counseling.

His first job was as a volunteer for Covenant House, a faith-based charity that helps homeless and runaway youths. It paid $12 per week.

“They gave us room and board, so we had everything we needed,” Racine said. “My wife and I have always lived a philosophy of — have a simple lifestyle, so others can simply live.”

It was through Covenant House that Racine met his wife Kelly, who is now a hospice social worker. The couple opened and ran a Covenant House in Honduras for six years, then helped start programs in Toronto and Houston.

In Jacksonville, Racine also formerly ran the Exchange Club’s Family Center, a program that helps prevent child abuse. As the center’s director in 1995, Racine was one of the first eight grant recipients of the newly formed Jaguars Foundation.

It’s a job that places a great deal of resources for good at his command — and something more powerful than that.

“There is a cool factor, obviously, in working for an NFL team,” Racine said. “At other nonprofits, they’re not talking on Monday about what your company did the day before.

“I think people sometimes don’t realize how much an NFL franchise brings to a city. It’s an impact goes so way beyond a win or a loss on a Sunday.” 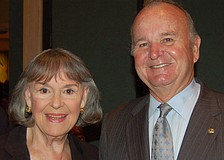 The other side of the game: Performance off the field also important