Shad Khan talks mojo, Downtown and wins for the Jaguars

Jacksonville Jaguars owner Shad Khan, considered to be one of the few single corporate players in town who could drive riverfront and other Downtown development, said Tuesday it’s time for action.

“There’s enough talk. We want to see some conclusion,” he said after a speech to the World Affairs Council of Jacksonville at EverBank Field.

Khan said there is “a lot of stuff in motion” Downtown, “a lot of oars in the water.”

He did not offer specifics Tuesday, but said: “We want to show some finality.”

Since his arrival in Jacksonville in early 2012 upon buying the Jaguars for about $770 million, the self-made billionaire has invested time, money and mojo — a popular word in Tuesday’s remarks — into Jacksonville. Forbes estimates his net worth at $4.3 billion.

After the speech, Khan was asked about community talk that he has hired and paid several architects to develop plans for the 40-acre vacant Shipyards property owned by the city near EverBank Field.

“We’ve been working on that for a while,” he said. “We need finality.”

Khan told the Daily Record in June he was interested in developing the Shipyards property. “I think it can be greatly enhanced” to bring economic vibrancy to Downtown, he said then.

In November, Jaguars President Mark Lamping said that if no one will step up to lead the effort in a reasonable timeframe, Khan can — and will.

Khan also has invested in the urban core Downtown.

A year ago, a development company led by Stephen Atkins bought the old Barnett Bank Building and the three Laura Street Trio buildings with financing from a company led by Khan.

Khan also was asked Tuesday about One Spark, the April 9-13 crowdfunding festival that brought an estimated 260,000 people Downtown during five straight days of the nicest weather Jacksonville had seen in some time. Khan also is a financial supporter of that event.

The key is to produce more results, he said.

During the sold-out lunch attended by 250 people, moderator Jim Stallings asked Khan what he sees coming together for Jacksonville.

“I think there’s been a vacuum here, quite frankly I don’t know why, but it’s got so much going for it,” Khan said.

“A homeless guy in Detroit has more mojo than a millionaire in Jacksonville,” he said. “We all need to contribute, but actions speak louder than words.”

Khan, a Pakistani native, immigrated in 1967 at age 16 to attend college in Illinois, graduating with an engineering degree in 1971. He worked at and then later bought Flex-N-Gate Corp., an auto-parts manufacturer.

He guided the company to become the 14th largest auto-parts supplier in North America, employing more than 17,000 people at plants and facilities nationally and internationally.

• “What a great ecosystem here to really nurture that and quite frankly, I am kind of amazed more people don’t tap into it.”

Being in Jacksonville: “On a national but also international scale, I had a great life and nobody knew it, nobody cared and then you get into football here in Jacksonville and Forbes puts you on the cover. That’s the power of Jacksonville.”

• “We are doing our part in Jacksonville. We want Jacksonville to do well. Yes, for some maybe personal reasons, so the Jaguars do well, but I think there is a bigger reason, a source of civic pride.”

• “Whether we like it or not, Jacksonville, outside Jacksonville, is defined by the Jaguars, so all of us have a stake here that we do well and really be a source of one of the engines for Jacksonville. … There are a number of other things we are working on locally. There is great potential here.”

Economic development: “I am always befuddled … why aren’t we doing better? Why don’t we have more jobs here?”

Young people: “That is absolutely the DNA, the vital juice, that everybody craves. … Ten-20-30 years from now, they are going to put us onto a stage where Jacksonville is going to realize its full potential .”

Coming to the U.S.: “People sacrificed a lot more and went through a lot worse than what I went through. … It’s looking to improve yourself.”

Early sales calls: “In the early ‘70s, times were probably even harder. … It was like going door to door looking for a job. In those days, you printed your resume and you gave a land line number. … You had to go back and follow up. You learn to be very, very nice to secretaries.”

Scope of Flex-N-Gate: Asked if he operated in 13 countries, he said it was “something like that. It’s like how many restrooms you have in your house. If you know immediately, you don’t have enough.”

Hiring traits: “The person I want to hire must have two traits. One, they want to be able to make money and they also must want to make a difference.”

Success and failure: “There are a lot more failures than success. Just look at Google. Statistically, there have to be 10,000 failures for every Google.”

• “Some of the best entrepreneurs were the ones who really had no choice,” he said, referring to founders of Kentucky Fried Chicken and Ford Motor Co. “Circumstances create an opportunity.”

• “The great thing about America is we embrace failure. … We look at it almost as a badge of honor.”

The NFL draft: “We want to get the best players. God knows, we’ve got a lot of holes to fill. We, just like you, want a successful business. It can’t be one person deciding. You have to get a number of ideas on the table. … There is no substitute for preparation.”

Inspiration: “There’s a mindset that you can start focusing on – the 10 percent of the glass that’s full or the 90 percent that’s not. That’s a choice we make. I think you have to focus on all of the things that are working well and how to make them better.”

Asked if there was something he could share that would be surprising to the group, and eliciting applause, Khan responded: “I think the Jaguars are going to start winning.” 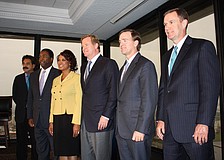 Khan: 'The benefits are many for the community and the Jaguars' 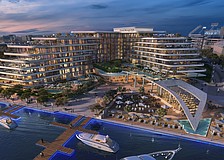 Jaguars owner confident Downtown hotel will be a Four Seasons 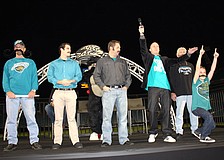 Khan 'all in' to develop Jaguars 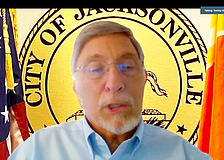 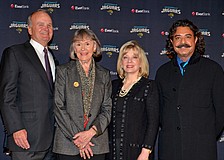