Brandi Thibeault was ready to buy a home, but she and her husband couldn’t find one they wanted.

They hoped to stay near Green Cove Springs and at a price range they were accustomed to as renters — about $1,000 a month.

That translated to a $150,000-$160,000 home, hopefully one with four bedrooms, to accommodate their four young children.

They found foreclosures. Nice on the outside, run down on the inside and needing repairs.

There were new homes in the Branan Field area that fit their needs, but they cost more than $200,000.

The family landed in Magnolia West, an Express Homes community by D.R. Horton.

Their four-bedroom, two-bathroom house has a washer, dryer, refrigerator and a range, all brand new and with warrantees. Total cost: $163,000.

“We really like it,” Thibeault said. “It’s definitely a good option for an entry-level buyer.”

At a time when homebuilders have been reluctant to dip their collective toe back into entry-level product, D.R. Horton is proving the market is there.

The nation’s largest homebuilder tripled sales of its entry-level Express Homes year-over-year during the quarter that ended March 31.

The “no-frills” homes forgo granite countertops and tile floors in exchange for Formica, basic carpet and vinyl. Prices locally start at $125,000 for a 1,540-square-foot home.

Nationally, about 2,000 Express Homes sold in the quarter. The line is now 18 percent of all homes sold by the company. In the Jacksonville area, the growth can be counted by developments. Express Homes sell in seven communities today, up from just two a year ago.

The product roll-out was well-timed.

National statistics show early signs that first-time homebuyers are returning to the market. Millenials, the next great hope for housing growth, lead the way.

The share of first-time homebuyers rose to 32 percent in May, up from 27 percent one year earlier, according to the National Association of Realtors.

On Realtor.com, millenials make up the biggest share of shoppers, said Jonathan Smoke, the company’s chief economist. Also, a website survey showed 65 percent of millenials want to buy a home in the next three to six months, up from 54 percent in January.

“Essentially what you see is an enormous sea change during that time frame,” Smoke said at a June conference of National Association of Real Estate Editors. “I believe we are in the midst of the beginning of millenials seriously getting into the market.”

Industry slow to capitalize on trend

If the sea is shifting, the building industry has lagged.

Move-up homes — for second-time buyers — are the industry’s dominant product today. Builder Magazine in May reported 100 homebuilders out of the 200 largest companies in the country are targeting that type of buyer, vastly outnumbering any other housing category.

The reasons why, said Mortgage Bankers Association CEO David Stevens, is builders are uncertain demand is there for entry-level homes.

They also are unsure whether borrowers could qualify for mortgages.

“What we’re seeing is when we put the product out there … there is plenty of demand. We’re not having any problem selling those houses,” D.R. Horton Chief Operating Officer Michael Murray said during an April conference call with investors. “Our evidence would show ... any limitations for the entry-level buyer is supply driven.”

It’s a sentiment echoed by Realtors in Northeast Florida.

“I don’t see people having problems with getting loans at the entry level,” said Rachael Ridaught of Re/Max Unlimited. “It’s the inventory that’s lacking.”

They were condos, town homes, foreclosures and homes that needed a lot of work.

“But if I search in Magnolia West where Express Homes are sold, I would get, like 30,” Ridaught said.

She has sold two Express Homes in Magnolia West in the last six months.

“It’s been very easy to pull clients to the Express Homes, because they are at such a discount compared to everything else on the market,” she said.

The homes are $50,000 less than their resale peers nearby.

Offering price point no one else does

Express Homes just came to Nassau County, where they are “selling like hotcakes,” said Craig Brewis of Berkshire Hathaway Home Services Chaplin Williams. In Fernandina Beach they sell for $170,000. In Callahan, for $140,000.

First-time homebuyers in Nassau County are young military couples and about six builders cater to them, Brewis said.

But Express Homes are a different kind of entry-level product.

“It’s like a spec home,” he said. “You’ve got just two choices for the interior package. You don’t even get a choice of color.”

“It’s odd in the market that you’re not having a lot of choices in the homes,” Brewis said. “But, to get a new home at the $150,000 price point, nobody really offers that. Nobody.”

At Green Cove Springs, Thibeault got to pick dark cabinets and dark countertops for her new home. The downside was she didn’t get to choose tile.

Kathy Coletti of Berkshire Hathaway HomeServices Florida Network Realty said it’s a much more conservative way to approach homebuying, rather than spending all the money up front.

“It’s kind of like it was 25 years ago,” she said. “As you live in the house, if you’d like to customize and change things, then you can do that.”

“I think more people are getting out there and feeling like they’re supposed to buy a home, as opposed to,’ I’m just going to rent and see what’s going to happen,’” Colleti said. “I think a lot of young people are now ready.” 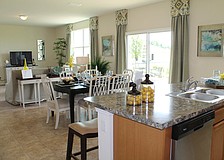 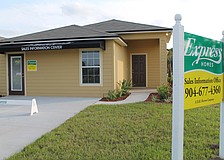 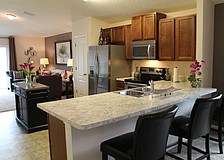 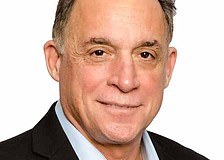 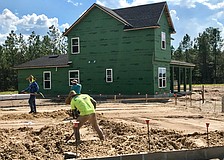