Durbin Park in northern St. Johns County, which is set to rival St. Johns Town Center in retail size and scope, will start “going vertical” with its first phase early next year.

Developer Frank Gatlin III said Monday that site work is underway at the 80-acre Pavilion at Durbin Park. Stores should open starting in the first quarter of 2019.
Jacksonville-based Gate Petroleum Co. is developing the 1,600-acre Durbin Park west of Interstate 95 and south of Race Track Road.
Gatlin Development Co., also based in Jacksonville, is working with Gate in a joint venture to develop the commercial space.
The Pavilion is south of Race Track Road and west of Florida 9B.
Gate expects to open a convenience store and gas station, as well as a Gate Express Carwash, at the site in late 2018 or early 2019.
Wal-Mart Supercenter and The Home Depot are confirmed for the Pavilion, which is a 700,000-square-foot project with an estimated investment of $150 million.
Gatlin, CEO of Gatlin Development, said negotiations could be completed soon for other tenants, including several junior anchor stores.
Gatlin said his group was in active negotiations to bring the first phase of the development to 90 percent occupancy.
The second phase is where the previously announced Bass Pro Shops will locate, pending negotiations, he said.
Gatlin said he also was talking with movie theaters “and a whole entertainment cluster” and other tenants for that phase.
He said he would be speaking with the iFLY indoor parachuting center for the second phase. The entertainment venue also is considering a site near Topgolf at St. Johns Town Center, but has not confirmed a Northeast Florida location.
A 150,000-square-foot Bass Pro Shops is planned for the second phase. It announced in 2012 it would open a Bass Pro Shop Outdoor World there by mid-2014, but that was delayed.
The Shopping Center Group will be the leasing agent for the retail space.
Durbin Park is designed for about 2.4 million square feet of retail space, 2.8 million square feet of office space, 999 multifamily housing units and about 350 hotel rooms.
The total retail space is almost twice the size of St. Johns Town Center.
Of the 1,600 acres, about 600 could be developed for building sites. The remainder is lake, wetlands, road right-of-way and green space.

Pet Supermarket, restaurants coming to Collins Plaza
Gatlin Development Co. is completing 40,000 square feet of retail space among four buildings at southwest Interstate 295 and Collins Road.
Pet Supermarket, with six Northeast Florida locations, is among the signed tenants. It has three more stores planned around Jacksonville.
Collins Plaza is anchored by Wal-Mart Supercenter, which is open.
A Gate Petroleum Co. gas station and convenience store opened there and a Gate Express Carwash should break ground soon next to it.
CEO Frank Gatlin III said Monday that the retail buildings are filling up.
Along with Pet Supermarket, confirmed tenants include Jersey Mike’s Subs, Salsas Mexican Restaurant, Pet Angels Animal Hospital, AT&T, China Kitchen, Coco’s Beauty Supply, Great Clips, Fancy Sushi, MetroPCS and Lee Nails & Spa.
The retail space is 75 percent leased.
Gatlin said his group is negotiating with retailers for the remaining 10,000 square feet and he hopes to be 100 percent signed in 90 days.
Two of the buildings are completed and tenants are moving in. Gatlin expects to break ground on the other two buildings within two weeks and be completed by year-end.
Gatlin Development bought the nearly 44-acre Collins Plaza in December 2014 and sold about 16 acres for development of the Wal-Mart Supercenter. 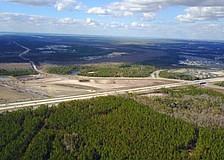 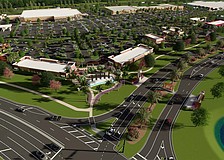 Stores, restaurants lined up for Durbin Park in St. Johns 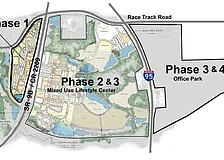 First phase of Durbin Park could open in 2018 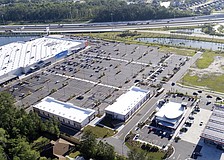