How court reporting is evolving

Monitored audio recording has replaced stenography in many proceedings.

The theme for the court reporting profession for the past several years has been “evolution.” It’s been caused by changes in how the courts are funded and operate, and also by advances in technology.

Legal stenography has changed from long rolls of paper to digital transcription. Facing budget cuts, courts can no longer afford to have a stenographer in every courtroom and at every hearing.

Technology is allowing both sides to continue to survive and succeed.

Melanie Simpkins, treasurer of Official Reporters Inc., has been a court reporter for 36 years. The company has a staff of about 35 court reporters and a contract to provide recording of proceedings and transcription services in Duval County.

“We can handle anything they need,” she said.

Traditional court reporting — a stenographer who will transcribe and later provide a printed transcript — is called for in felony cases and for certain hearings and depositions.

In other cases, such as misdemeanor cases and family court, the company provides a “monitor” that attends a proceeding when audio is being recorded and digitally annotates who is speaking.

“A monitor costs less than a stenographer,” Simpkins said.

Each of the building’s 51 courtrooms is equipped with microphones for the judge, witness and attorneys. Recording is controlled by a computer in the courtroom that sends the audio to a storage facility elsewhere in the building.

There also are what Smith calls “crash carts” — portable systems that can be used anywhere a proceeding needs to be recorded.

The audio recording and storage system, which also was in use in the old courthouse on East Bay Street, is provided by a third-party vendor.

Smith said it’s limited to 15 recording locations at a time because of the licensing agreement and the equipment is becoming obsolete.

It’s being replaced by a system that was developed by Fred Buhl, chief technology officer in the 8th Circuit. Buhl wrote the software that’s the basis of the “OpenCourt” archiving system that has been approved by the state. It’s currently in use in 40 counties.

“It will save us money because there’s no recurring maintenance expense or licensing fees. We could use it in all the courtrooms at once if we needed to,” Smith said.

Buhl was recognized for the expense-saving system with a 2017 award from Prudential Florida TaxWatch. He also was named IT Professional of the Year in the state court system by the Agency for State Technology.

The system also meets requirements of the Americans with Disabilities Act and interfaces with the Judicial Bench Viewer software that allows judges to electronically maintain their court dockets.

Another aspect of evolution in the court reporting profession is outside the courtroom. The fastest-growing segment of the business is real-time transcription, such as closed-captioning of television programs and other live events, said Amy Marie Yarbrough, owner of North Florida Reporting Inc. and vice president of the Florida Court Reporters Association.

“In the future, the most in-demand court reporters will be the ones who can do real-time,” she said.

“We are a very litigious society. That’s not going away,” she said.

Simpkins also is confident there will continue to be a need for accurate, professional transcription services, despite any changing trends or technology.

She first heard rumors of the demise of the profession as soon as she graduated from court reporting school.

“I’ve been doing this for 36 years. I was told when I started I wouldn’t have a job in 10 years,” Simpkins said. 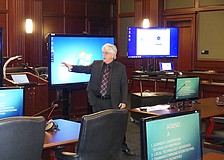 Aging courthouse technology: ‘We’ve gone as far as we can go’