Developer says project is on track with apartments ready by spring of 2019.

Construction fencing is in place, interiors are prepped, other work has been done and now Danis Builders LLC earned the city’s approval to build-out the historic Barnett National Bank Building Downtown in preparation for tenants.

“This is the final building permit that takes us all the way to completion,” developer Steve Atkins said Monday.

The permit covers the core and shell of the 18-story building. There will be additional permitting for the interior build-out space for office and retail tenants and for the 108 apartments planned on floors eight to 18.

Atkins said the project is on track. He said the shell of the building should be completed into a white-box state by late summer, followed by interior space build-out by the end of the year for the University of North Florida on the fourth and fifth floors.

UNF said in October it plans to lease up to about 13,300 square feet of space to create the Entrepreneurial Development and Business Incubation Center and to house undergraduate and graduate-level classes.

The Downtown Investment Authority approved a $380,000 loan for UNF to build-out the satellite campus.

“I really think that will be a great program and inject a lot of energy Downtown,” Atkins said.

Remaining spaces will be built-out in the early spring of 2019, he said. Apartments also should be ready by then.

Atkins said the sixth and seventh floors are available to a single or multiple tenants. Each nets about 6,600 square feet of space.

The first floor will be leased by a bank, and the second and third levels will be “some new stuff” that Atkins said he will not yet disclose.

As reported, Vagabond Coffee Co. will open in about 1,500 square feet in the lobby, and Chase Bank is expected to lease as the anchor name tenant.

Atkins has not confirmed Chase Bank.

The Barnett work is part of an estimated $90 million redevelopment of the building at 112 W. Adams St., the nearby Laura Street Trio buildings and a new parking garage.

The city approved a permit Friday for Danis Builders and owner Barnett Tower LLC to remodel the vacant Barnett structure at a cost of almost $22.4 million.

Atkins, principal and managing director of SouthEast Development Group and manager of Barnett Tower LLC, said in November he planned to complete the work and open the first phases at the end of this year.

Atkins said demolition and structural remediation has been taking place prior to the construction permit approval. That included removing, reconditioning or replacing all 964 upper windows that had not been installed properly under prior ownership.

The 156,774-square-foot Barnett tower was built in 1926, according to the permit. The architect is KBJ — L&B Architects.

Atkins said most of the apartments are one-bedroom units, although there are some studios and some two-bedroom units on the top floor.

Atkins expects advertising and preleasing will start in a few months. A new website will include information.

He called the current Barnett-Trio.com a placeholder for the new site. Potential tenants can preregister.

His group is calling the project The Barnett Building and the apartments are The Residences at The Barnett.

SouthEast Development Group and The Molasky Group of Companies announced in October that renovations would begin. The work was estimated to take up to 14 months.

In June, they completed a redevelopment agreement with the city for $9.8 million in local incentives to complete the project along with the Laura Street Trio.

The deal is with Barnett Tower LLC and Laura Trio LLC.

Design work has begun on a 550-space parking garage nearby that is scheduled to open when the building is completed.

The Laura Street Trio at Adams and Forsyth streets is planned for a 145-room Marriott-branded hotel, grocery store and other tenants.

The Barnett Building and Laura Street Trio will comprise about 330,000 square feet of space in the heart of Downtown.

In June, City Council approved the incentives for the redevelopment deal that states the projects must be completed in five years.

Atkins said Danis is working shifts and over the weekends to complete the project, with an estimated 125 people on-site.

“We are thankful and appreciative for how much the community has embraced the project,” Atkins said.

“I am proud to be able to do this here in my hometown. It’s a great team effort with Molasky,” he said.

His group next moves on to redevelop the Laura Street Trio, a set of three historic structures.

“I personally think collectively these projects will completely create a new dynamic and a new feel for our Central Business District,” Atkins said. 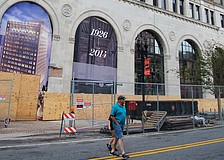 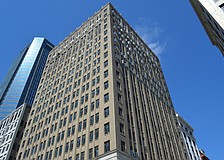 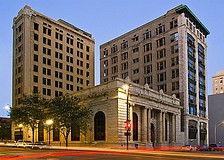 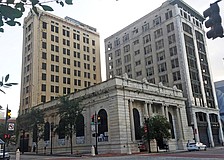 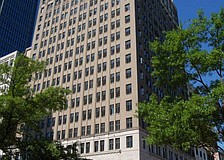