The Federal Bar Association Jacksonville chapter’s annual “Spirit of Giving” awards recognize those who have made notable contributions in service to others.

“It’s a testament to the legal community in this area that we haven’t run out of people to honor,” said U.S. District Judge Timothy Corrigan, who presented the 12th annual awards at The River Club.

Attorney Andrew Bonderud was recognized for his service as a volunteer attorney representing federal criminal defendants who are incarcerated at the time of their trial.

Corrigan said the federal court’s Middle District of Florida, including the court in Jacksonville, has a “heavy prisoner docket” and Bonderud’s pro bono representation “benefits his client, his opponents and the court.”

Also recognized were members of Jacksonville’s Guardian ad Litem program. Staff and volunteers are advocates for children who have entered the judicial system in matters such as adoption and temporary custody.

“Going above and beyond expectations is what Guardian ad Litem does every time the federal court calls,” he said.

She coordinates volunteer attorneys who assist low-income residents with a range of legal matters from landlord and tenant issues to last will and testament documents.

“I have a ringside seat for the connection between justice and giving,” Para said.

She was surprised after her speech to receive a Spirit of Giving Award in recognition of her service to the legal community and low-income clients since she joined JALA in 2009.

Corrigan also cited Para’s coordination of the federal court’s Bankruptcy for Pro Se Litigants program that arranges legal counsel for people who must represent themselves before the court.

“And she convinced four federal judges to pass out candy at JALA’s Halloween event,” he said.

Florida residents now may apply for or renew concealed weapon licenses at the Downtown branch of the Tax Collector’s office at 231 E. Forsyth St.

The Florida Department of Agriculture and Consumer Services granted authorization to the Duval County Tax Collector’s office to take applications, fingerprint applicants and send the information securely to the department.

The service is available 8 a.m. to 4 p.m. Monday through Friday.

Appointments are recommended and can be made by visiting duvaltaxcollect.net.

To petition for general admission to the court’s Bar, visit flmd.uscourts.gov/
membership-courts-bar.

After you select an admission ceremony date and complete the online registration form, the page will redirect to Pay.gov to pay the $196 enrollment fee by credit card, PayPal or bank account.

The Florida Bar is seeking applicants for the Florida Patient’s Compensation Fund board of governors. One lawyer is needed to serve a four-year term beginning July 1.

The board supervises the operations of the fund, which provides excess medical malpractice coverage to Florida health care providers.

Also, three lawyers from the territorial jurisdictions of the first, third and fifth state appellate districts are needed to serve four-year terms commencing July 2 on the Statewide Nominating Commission for Judges of Compensation Claims.

Applicants must be members of The Florida Bar who are engaged in the practice of law. No attorney who appears before any judge of compensation claims more than four times a year is eligible to serve on the commission.

Commissioners are not eligible for state judicial vacancies filled by the judicial nominating commission on which they sit for two years following the expiration of their term. Commissioners are subject to Florida financial disclosure laws. Meetings and deliberations are open to the public.

Lawyers interested in applying for the vacancies may download the Application for Special Appointment from the Bar’s website, floridabar.org, or call (850) 561-5667 to obtain the application form.

Applications must be received by the close of business on Feb. 15.

Pro Bono Attorney of the Month 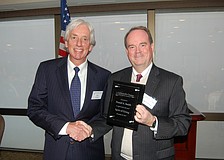 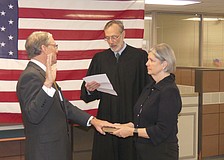 The Marbut Report: Jim Overton sworn in as tax collector