Chance Partners LLC is close to launching construction on the first of two apartment communities that could total more than 600 units — and an investment topping $100 million — on the edge of historic San Marco.

Construction could start in March on the estimated $42 million San Marco Promenade along Philips Highway between Mitchell Avenue and River Oaks Road.

Work on the up to $60 million San Marco Crossing, just a few blocks north, could start early next year.

Partners Jeffrey Rosen and Judd Bobilin said construction for San Marco Promenade would start with 284 apartment units on the northern half of the 17.3-acre site with completion in summer 2019.

The apartments will be a mix of one-, two- and three-bedroom units built among three residential buildings.

Based on the percentages they provided, there will be about 185 one-bedroom units; 79 two-bedrooms units; and 20 three-bedroom units.

Rental rates have not been determined.

Amenities will include a pool, fire pit, walking trails, fitness center, co-working business center for residents; and a two-story clubroom.

Chance said it has not completed its plan for the southern part of the site. While the current approved Planned Unit Development allows up to 650 units, Chance will apply to modify the PUD when the final number of units is determined.

An earlier plan indicated a total of up to 510 units.

San Marco Promenade previously was known as Jackson Square. The site had been a car dealership.

Rosen said the location is near San Marco and the employment and medical developments along the Southbank of the St. Johns River.

“I think there is a need for high quality housing closer to Downtown and walkable to San Marco,” Rosen said.

The sites also are near the construction of the Overland Bridge and improvements to Interstate 95, easing access to the interstate.

Chance Partners also will build 10,000 square feet of retail space at the Promenade for a single tenant or multiple users. Bobilin said leasing agent Franklin Street will launch marketing for the space.

Rosen expects the retail development to start after the apartments are underway.

Rosen and Bobilin, through Chance Olevia LLC, propose to buy 6.82 acres for development of San Marco Crossing at Kings Avenue, not far from the Promenade.

They are under contract to buy the property, which is owned by Southside Assembly of God Inc. at 2118 Kings Ave. The church uses a portion of the property and the remainder is vacant.

The site is at Kings Avenue between Olevia Street and Mitchell Avenue.

Chance Olevia can redevelop the site with up to 372 apartments and townhouses along with recreation and open space, plans show.

Rosen and Bobilin anticipate buying the property at the end of March, starting construction in the first quarter of 2019 and completing the first units in the summer of 2020.

They estimate the investment at $50 million to $60 million.

Rosen and Bobilin said they have not decided whether there will be one or two phases of construction. Final design work is pending to determine the exact number of units and buildings.

Amenities will be high-end finishes and common areas, they said.

They anticipate Southside Assembly would remain on the property until site work begins.

“The property provides a vital link in the redevelopment of this corridor along Philips Highway and Kings Avenue in San Marco,” says the rezoning application, approved by City Council on Tuesday.

According to the San Marco Crossing application, more residential use in the area will increase walkability, connectivity and activity as a central point between St. Nicholas, San Marco Promenade, Atlantic Boulevard and San Marco Square.

RiverVue is the name of the former Commander Apartments and St. Johns Village property along Fishweir Creek that Chance Partners is redeveloping into a $40 million, 228-unit apartment community in Avondale. It could be ready for leasing this summer. 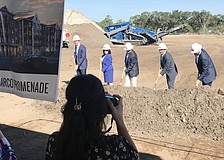 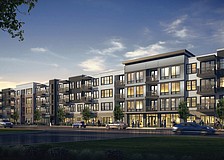 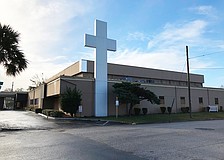 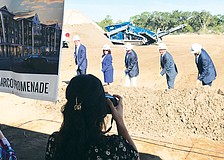 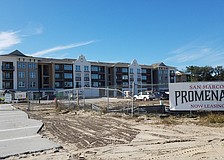