Atlanta-based ShareMD, a medical office building owner and operator, paid $67 million for Eight Forty One, the Southbank office tower anchored by One Call and Baptist Health.

The seller was GV-IP Jacksonville Owner LLC in care of GEM Realty Capital Inc. of Chicago. GEM is a real estate investment trust that partnered with IP Capital Partners. CBRE represented the seller.

In the past four months ShareMD has invested $100 million in Florida real estate, Easton said.

ShareMD developed a co-working medical suite concept in Southern California and plans to introduce the concept to Florida.

“The company builds out clinical space for doctors and other medical professionals and then leases it by the half-day, day, week or month—allowing physicians to expand their geographic reach and save money by not being tied into long-term rents,” the release said.

Plans for the Eight Forty One building include reserving 10,000-15,000 square feet for co-working and engaging long-term leases from medical tenants in remaining vacant space, LaBreche said.

“With an aging baby boomer population, a burgeoning demand for healthcare services and insurance companies favoring outpatient care, we think the timing is perfect to execute our business plan in Florida,” said George Scopetta, president and managing partner of ShareMD. “The opportunity is endless.”

Property records show the 22-story, almost 600,000-square-foot tower was built on 6.5 acres in 1955 when it was the tallest building in the Southeastern U.S.

It is marketed as 20 stories and almost 495,000 square feet of leasable space.

A group led by Boca Raton-based IP Capital Partners paid $55.5 million for the property, then known as the Aetna Building, in December 2013. 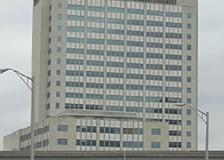 Sources: Southbank tower to be sold within weeks 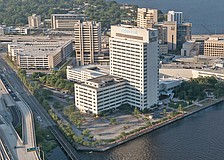 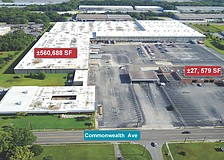 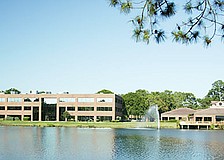