Groundbreaking is set this spring for the 300,000-square-foot medical center in Fleming Island.

Groundbreaking for the 100-bed hospital will be in spring 2020, with an anticipated opening date in early 2022.

The hospital will provide women’s services and enhanced cardiology services, in addition to the services provided at the Baptist Clay Campus. That includes an adult and Wolfson Children’s Hospital emergency department, ambulatory surgery center, specialty services and imaging, it announced.

The project will include private patient rooms, a Starbucks Coffee shop, an outdoor dining area and a community room that holds 125 people. An outdoor jogging path will be added to connect to the existing Black Creek Trail.

“Clay County residents tell us they need more hospital-based health care services close to where they live and work,” Roark said. “Having a full-service hospital nearby will eliminate the need for travel, while providing the medical expertise that Baptist Health is known for.”

Roark has been with Baptist Health since 2012 overseeing emergency centers for the system, including its addition of free-standing emergency room sites throughout the region. He has been the administrator at the Baptist Clay Medical Campus since 2013.

Baptist opened its $39 million medical campus in Clay County in 2013. It added a free-standing ER the same year. The outpatient surgery center opened in 2018. 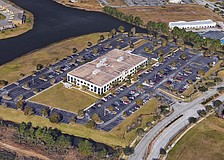 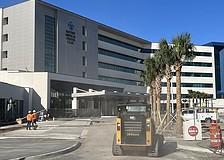 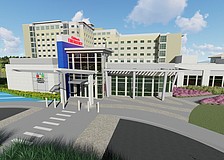 Baptist to start on emergency center 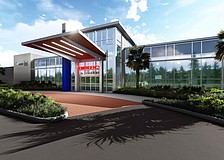