The University of North Florida graduate learned contracting from his father at The Auchter Company.

As a boy, Brad Glass had a ground-floor and often rooftop perspective to the construction of Jacksonville’s modern Downtown skyline.

Glass said his father, Bill Glass,  always was inspecting blueprints and renderings at the family table, an unofficial satellite office for Jacksonville contractor The Auchter Company.

“We never could use our dining room table because it always had plans all over it. My dad worked day and night — a really hard worker,” Glass said.

Glass, 53, brought his 12 years of construction sales experience at Auchter to The McCall Group of Companies in 2017 as executive vice president of development, recruited by Perry-McCall Construction Inc. CEO Wayne McCall.

Glass said he’s the only executive at the contracting firm dedicated to sales and marketing.

Glass didn’t immediately join Auchter after graduating from the University of North Florida in 1989. He didn’t want his peers to say “he took the easy path” going to work for his father.

Instead, Glass sold pharmaceuticals for six years, splitting the time between Abbott U.S. and Pfizer subsidiary Parke-Davis and Co.

In 1995, his father asked him to make the transition to construction sales for Auchter, two years after Bill Glass had bought out the company’s stockholders.

“I told my dad I didn’t know anything about construction, but he told me it doesn’t matter. People will hire you. They will buy you as long as you have a good product,” Glass said.

“Brad’s family has touched just about every significant construction project in Jacksonville,” Peyton said. “It’s quite a legacy of commercial construction in our city.”

Auchter, founded in 1929 by George D. Auchter, was responsible for some of Jacksonville’s most recognizable structures before it shut down in late 2007 from financial strain because of the Great Recession.

It built the Independent Life tower, now the Wells Fargo Center, in 1977; the Times-Union building at 1 Riverside Ave. in 1967; and The Jacksonville Landing in 1987.

Glass said he worked on the City Hall at St. James Building restoration in 1997, a joint venture with Perry-McCall.

Glass said he’s thankful to be with The McCall Group and continues to share his family’s Auchter legacy with his two daughters, Julia and Emily.

“I’m proud when I drive my kids around downtown and point out the towers and buildings we built,” he said.

He said that since he started at Auchter, the work of the contractor has evolved into a start-to-finish role in development rather than just bid-and-build.

“The savvy developers out there understand that the contractor can really be their best friend and partner in these jobs,” Glass said.

Glass said The McCall Group and other firms often are hired before a project architect is named and works as a “negotiated partner” with the developer to budget a project as it’s designed.

That process can prevent cost overruns and provide guidance on what’s feasible to build on a particular site.

“You wouldn’t believe how many times I’m out there looking for land when a developer is trying to find the property, budgeting it, having an architect come in and say ‘here’s what you could put on this property,’ ” Glass said.

Among its current projects, Perry-McCall is a co-contractor in the $145 million Wolfson Children’s Critical Care Tower and the Baptist Arrival Tower Downtown, partnering with DPR Construction.

Even with the COVID-19 slowdown, Glass said The McCall Group is “in the mix” pursuing more than $2 billion predominantly in Florida projects.

Glass has a “chase list” in Northeast Florida of more than $1 billion spread over 25 projects, including many in Downtown Jacksonville.

The McCall Group wants to bid on Khan’s proposed $450 million Lot J mixed-use project that is a partnership with the city and The Cordish Companies.

Perry-McCall also is in early talks with the Museum of Science and History on its proposal to move to the Downtown Northbank with an $80 million to $90 million facility and with The District, the $600 million mixed-use development by Dallas-based Preston Hollow on the Southbank.

“We were fortunate to have a very solid backlog of work going into (the pandemic),” Glass said.

“I’m seeing some very big work being talked about.” 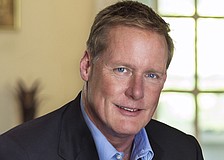 The McCall Group of Companies says owners and developers are skittish