Henry Curr says prices could ease if consumers return to spending on services instead of goods.

Not long ago, it would have seemed crazy to suggest we should be concerned about high prices, according to Henry Curr, economics editor for The Economist magazine.

“Even 18 months ago, economists saw worrying about inflation as something for people with tinfoil hats,” Curr said April 19 in a talk to the World Affairs Council of Jacksonville.

However, as the world recovered from coronavirus lockdowns, a fast-growing economy sent prices soaring. And policymakers in the U.S. made some mistakes, in Curr’s opinion.

“People were quite slow to realize how fast the rebound was,” he said.

The U.S. didn’t need the additional $1.9 billion federal stimulus package in March 2021, Curr said. He added that was not a criticism of the Biden administration, since President Trump already was pushing for the package and it had bipartisan support.

“I definitely think the size of the stimulus was a mistake,” Curr said.

“America did more stimulus. Now its economy is overheating.”

Consumer spending patterns also are contributing to inflation, Curr said. Since the pandemic, Americans are spending more money on goods and less on services, and the high demand is driving prices higher.

“That switch is a fundamental part of the story,” he said.

“Maybe that (inflation) goes into reverse if people return to a normal pattern of spending.”

Rising gas prices are a big story in the U.S., but higher energy prices are having a bigger impact in Europe, where people spend more of their income on energy, Curr said.

A ban on Russian oil shipments in Europe would create more hardships for consumers there. But Curr, a U.K. native, thinks Europeans may be willing to accept that to rein in Vladimir Putin as Russia’s invasion of Ukraine continues.

People were willing to accept some economic hardships as a trade-off for lockdowns to rein in the coronavirus, he said.

“I think the cause now (Ukraine) is equally, if not more noble,” he said.

Another issue affecting the global economy is the coronavirus response in China, with current lockdowns affecting two-fifths of China’s economy, Curr said.

“There’s no real exit plan for China getting out of this,” he said.

The impact on the world economy is mixed.

“The good news is China is not a huge source of demand right now,” Curr said.

“The bad news is it is an important source of supply.”

Curr spoke during a lunch event Downtown at The River Club on the 35th floor of Wells Fargo Center. It was a spectacularly sunny afternoon.

“I’m afraid times for the world economy are not so sunny and bright,” he said.

But he apologized for the overall negative tone of his talk.

“I’m not used to being a doomster,” he said. 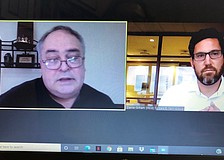 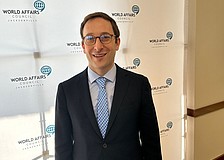 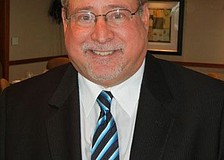