A few remain from the 'old' days

Thirty years ago, downtown Jacksonville was still a still a shopping destination. As the suburbs blossomed and shopping malls and plazas came into vogue, retail fled the core city leaving canyons of crumbling buildings and boarded windows. A few old businesses obstinately remained. Most migrated nomadically from block to block as their tenant buildings were closed or demolished. Yet, while competitors closed their doors and customers slowed to a trickle, all the owners of downtown’s veteran stores say there is no place they’d rather be.

“We do good work. That’s why we keep in business,” said Debbie Kounoupas of Gus and Co. on the corner of Laura and Adams streets.

Gus and Co. has been a downtown fixture since 1904, offering shoe and luggage repair. With eight shoeshine chairs tucked in one corner, it’s half social center and half business. Kounoupas and her husband Nikias bought the company from descendants of the original owners in 1991. After an original spot in the Seminole Hotel, it moved to the Roosevelt Hotel on Adams Street until the early 1990s when the building was closed and boarded up. Now operating from the Elks Building, Kounoupas has no plans to stray far if she must move again.

Across the street from Gus and Co. is another downtown old-timer. Jacobs Jewelers has been in town since 1890. Originally on Bay Street, it’s old enough to have survived the Great Fire of 1901. It migrated to Forsyth Street and eventually settled in on Laura Street around 1930. While other jewelry stores rose and fell around it, Jacobs remained despite the proliferation of similar shops in suburban shopping malls.

“A lot of our customers work downtown,” said owner Roy Thomas. “We have 70,000 people working downtown. There aren’t any malls with 70,000 people that work around them.”

Like Kounoupas, Thomas attributes his longevity to his work ethic.

“I think we just work harder at the business,” he said. Not to say the other guys didn’t work hard, but he said others had different interests and philosophies on how their businesses should operate.

Thomas came to work for Jacobs in 1968 as a manager and eventually purchased the business in 1986 with his wife Delorise. Over the years, Thomas said he hasn’t noticed the severe drop off in sales that sent other stores packing.

“Business was good in the late ‘60s but not necessarily better than it is now,” he said, despite the fact that large department stores like Sears still operated downtown 30 years ago. “I’m sure if they were still here, our business would be a little bit better.”

Thomas pointed to the bright side of the mass exodus of downtown retail shops.

“People only have an hour, hour and a half to shop at lunch. It just gives them more time to shop in here,” he said. “I think it helped us because it was much easier for customers to get parking.”

Nevertheless, parking — or lack of it — is still a sore spot among downtown merchants. The only veteran downtown retail store with its own parking lot is the Young Men’s Shop, but that won’t last long. The 82-year-old clothing store will permanently close in January to make way for the new downtown library’s parking garage. Owner Michael Lissner looked for another suitable location with on-site parking, but found none within the city core. The same story rings true for the rest.

“That’s the biggest problem we have is lack of parking,” said Eric Erickson, owner of Knott & Co. jewelers at 225 N. Hogan St.

Knott & Co. sells and repairs jewelry and watches. Downtown stalwarts since 1934, Knott & Co. ownership cites the same reasons for sticking around as their business brethren: no desire to leave, repeat customer base, a worthwhile location to do business. Like their brethren, lack of parking makes it challenging to attract new customers.

“Sometimes it’s a little bit of a struggle for customers,” said Thomas. “But if they drive around, they’ll find a spot.”

The imminent re-entry of downtown housing could prove the shot in the arm downtown has been looking for ever since the retail giants fled for the suburbs. The Downtown Master Plan calls for special downtown areas, including an entertainment district along Bay Street that would transform the area into a 24-hour center of activity. City officials are hoping for it. The residential developers are banking on it. The merchants will believe it when they see it.

“I don’t know if it will help, but it will be nice to have,” said Erickson. 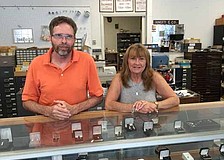 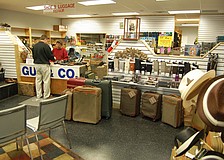