Ghostwatching? Here's where to go

In addition to the Florida Theatre, there are other places in the area where spirits may be found. At least, that what an organization called The Jacksonville Amateur Ghost Hunting Society says. Here are some spots to lurk about:

The building is allegedly haunted by a ghost of a Spanish-American War veteran who was shot in the chest with a blast from a sawed-off shotgun as he entered the front door of the bar in 1907.

Cigarettes mysteriously disappear when left at the Hickox grave.

The southeast corner of the 10th floor is said to be jinxed. Suite 711 is haunted by sounds of doors opening and closing and phantom footsteps.

Listed in The National Directory of Haunted Places, apartment 40 in the University Boulevard complex had so many reports of ghostly activity that it was converted to a storage room. The spirit haunting the front office is said to be Billie Boyd, who managed the Carriage House for more than 20 years. After she died in 1987, Boyd’s presence was detected by the new manager. Also, an ordinary white cat is seen occasionally in the courtyard, but vanishes into thin air when approached.

An apparition of a young woman in copper-colored dress looking out a top floor window has been seen.

The 10th floor is said to by haunted by an employee who committed suicide when the drafting department became computerized.

Witnesses have seen the spectra of an African-American woman along the bridge. It is believed to be a women thrown from the bridge by an assailant to her death in 1996.

Haunted by the “Lady in Violet,” a man in old-fashioned attire standing in the door of an unmarked mausoleum and the ghost of a woman near the memorial known as the “Ugly Angel” tombstone.

Haunted by a vanishing hitchhiker. Some have reported swerving to miss a woman standing in the road.

Listed in The National Directory of Haunted Places, the now-closed Beach Blvd. restaurant, located in a two-story log cabin built in 1934, has a ghost that has been seen and heard by several employees. The ghost is said to be Alpha Paynter, who operated a boarding house in the cabin and is buried in the yard behind the building.

Ghost of Louise Gato, murdered in 1897. Some have heard sounds of weeping, seen spooky lights and the ghost of the woman buried near rear of cemetery.

Haunted by a mad woman who imagined she saw men building coffins and one of them was for her. Many years later, the building was used for manufacturing coffins.

The ghost in the Florida Theatre

JCCI introduces the future to the past 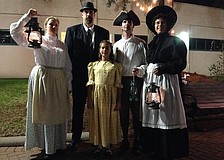