The 4th Circuit Judicial Nominating Commission has announced a judicial vacancy in Duval County Court created as a result of Gov. Jeb Bush’s recent appointment of County Judge Linda McCallum to the circuit court. The term of this appointment to the office of county judge will expire on Dec. 31, 2004.

Applicants for this vacancy must reside within the 4th Judicial Circuit (Duval, Nassau or Clay counties), be a registered voter and have been a member of The Florida Bar for the preceding five years.

The original and 10 copies of the completed application must be received by Whitman no later the noon Jan. 17, 2002.

Applications will be screened by the 4th Circuit Judicial Nominating Commission, which must send at least three, and no more than six, names to the governor by Feb. 5, 2002. The governor will make the appointment from the names recommended.

Interviews may be conducted after the application deadline at a place, date and time set by the nominating commission. 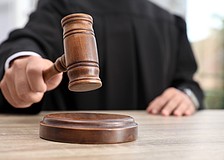