by The Florida Bar News

Create a new Office of Public Advocacy to provide representation for children in court and take the job of defending children in delinquency cases away from public defenders are key features of a proposed committee bill that passed out of the Senate Judiciary Committee earlier this month.

“It’s a complicated, contentious issue, and it’s got a long way to go,” said Sen. Locke Burt, R-Ormond Beach, chair of the committee that released a 47-page interim report on the legal needs of children in November.

The report notes that while children have the right to counsel at all stages in delinquency proceedings, when children are embroiled in abuse and neglect cases in dependency court, only 36 percent are afforded the services of a guardian ad litem, and most have no representation at all.

“I am pleased that the Senate is going to take an in-depth look at the important issue of representation of children,” said 11th Circuit Judge Sandy Karlan, who chairs The Florida Bar Commission on the Legal Needs of Children that identified representation as a priority issue.

Judge Karlan told the Senate Judiciary Committee that its report “was a good beginning.”

Regarding the big debate of whether children in dependency court should have a lawyer or a guardian ad litem assisted by a lawyer, Karlan testified: “There are strong opinions on both sides. It reminds me a little of high-conflict custody cases, where there’s a parent on one side, and another parent on the other side. There is no tangible evidence just yet which is right. Guardian or lawyer? And the child is lost. We have children in the system talked about as though they don’t exist. Our commission has not come up with a final model yet. But we agree that children need a strong and consistent voice.”

The Senate Judiciary proposal recommends a beefed-up guardian ad litem model, where every child has a guardian and every guardian has an attorney, but it is not explained how the state would pay for this costly model.

The rationale of placing the duties of representing children charged with crimes under the proposed new office,explained the committee’s Staff Director Dorothy Johnson, is to avoid conflicting court orders when children are involved in both dependency and delinquency court.

Public defenders with expertise in delinquency cases are the best line of defense in preventing children from having criminal records that will follow them the rest of their lives, Dillinger said.

“Forty-percent of our dependency cases are delinquency cases, but not simultaneously. When the dependency system fails, they’re back in delinquency,” he said.

“The irony in dependency cases is that parents get lawyers and there is no lawyer for the child. That’s what we want to change.”

Sheila LaCroix, a foster mother with eight years experience, testified from Orlando via video-conferencing: “The volunteer GAL program is a definite necessity, but if they don’t have lawyers they get railroaded in court. Children need a voice who can speak the same language in the courtroom.”

Sen. Skip Campbell, D-Ft. Lauderdale referred to a Utah study where the average stay in foster care was 9.7 months (compared to Florida’s two years) after children were given court-appointed attorneys in dependency cases, and a GAL.

“We’ve got a problem here. It’s broke. I congratulate you, Dorothy, on the fine work in this report. But it doesn’t go far enough,” Campbell said. “It does lead us in the right direction.”

— Reprinted with permission of The Florida Bar News.

Should all children in court be represented?

Introducing the Protecting Our Children Section of The JBA

Ethical issues in the representation of child clients 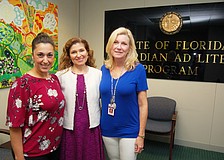 Guardian ad Litem: ‘We make sure the child’s voice is heard’