Jacksonville got a step closer to recapturing the atmosphere that permeated Downtown during Super Bowl week with an ordinance allowing bars in the Bay Street Town Center between Ocean and Liberty streets to serve food and/or beverages on the sidewalk. The ordinance was approved Tuesday by the City Council.

“This legislation will bring more people to the streets Downtown and it will be a young crowd,” said Terry Lorince, executive director of Downtown Vision, Inc.

“Those blocks already draw close to 1,000 people on Friday and Saturday nights. Hopefully, this will make the situation even better.”

In addition to complying with all other licensing requirements and the Downtown Property Maintenance Code, venue owners must be granted an additional sidewalk cafe permit and pay a $250 annual fee. They must also meet other requirements including ensuring that alcoholic beverages are consumed only by patrons who are of legal drinking age and are not passersby or those obviously intoxicated.

The sidewalk cafe areas must be clearly defined by the installation of temporary barriers such as fences or planters and must be supervised by security or staff personnel, surveillance cameras or both.

The permits are to be granted by the Jacksonville Economic Development Commission. They may be suspended if sidewalk service is anticipated to interfere with pedestrian traffic during a community event.

“The City will let the bar owners use the sidewalks, but if we need them for a block party or some other special event, we’ll temporarily suspend the permits,” said Eric Lindstrom, JEDC site development coordinator.

Lindstrom pointed out that Bay Street Town Center was a popular destination during Super Bowl week and the JEDC would like to promote a similar atmosphere on a full-time basis.

Places where groups of people gather are also perceived as being safe and inviting.

“It’s an entertainment area and we want to liven up the street. We like street life because it makes people more comfortable and we think having sidewalk cafes will create a good atmosphere,” he said.

Lindstrom added that while the existing hospitality-related businesses on the three-block stretch of Bay Street addressed by the ordinance are bars, the JEDC has received inquiries from potential restaurant owners.

The Jacksonville & the Beaches Convention and Visitors Bureau also believes the new legislation will have a positive impact.

Carrie McLean, CVB communications manager, said creating an outdoor food, beverage and entertainment zone just a block from the 966-room Hyatt Regency Riverfront, “would be a great thing for visitors to discover about Jacksonville.

“Something like this can take Downtown to a whole new level.” 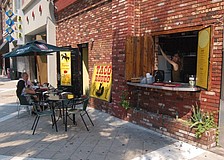 Developers have big plans for Downtown