OK, I'll admit I was a little "Scroogish" when I was informed I had to write this December article.

We typically have one article per board member each year. Thinking I would get ahead of the game for the 2013-14 JBA year, I took the first article of the year in July and wrote about the highlights of the year.

Later, after assignments came out for the remainder of the year, I noticed I had been selected for a second article for the 2013-14 year. My reaction was "Bah, Humbug." However, as I began to research topics for this article, I discovered some amazing acts of kindness by our JBA members and am thankful for the opportunity to share these good deeds with you.

Similar to the plot of Charles Dickens' 1843 novel, "A Christmas Carol," wherein Ebenezer Scrooge was visited by three ghosts — Christmas Past, Christmas Present and Christmas Yet to Come — your JBA was enriched due to three incredible acts of kindness performed by its members in recent weeks.

The Ghost of the Senior Project

As you know, The JBA conducts The JBA Senior Project each year. The project typically involves approximately 500 senior citizens.

Upon discovering this reduction, JBA member Rose Marie Preddy took it upon herself to identify additional senior citizens to participate in the project. Rose Marie's efforts identified approximately 100 seniors that were added to this year's program. We hope to rebuild our referral base for next year's project and with the initiative of members like Rose Marie we will make it.

As a selfless plug, Rose Marie and The JBA are looking for members to spread goodwill and cheer to seniors at Cathedral Gerontology nursing home Downtown. Simply purchase and wrap gifts for a resident. Delivery is optional but encouraged. Contact Rose Marie Preddy at [email protected] to for more information.

The Ghost of Automotive Bills

Our next story involves automotive troubles and an act of kindness involving a JBA member from Rogers Towers, P.A.

As it turns out, I have pretty good intel involving acts at the law firm. Rogers Towers attorney Oshja Oolseywa — just to be clear, I have used a military grade encryption code to conceal each party's identity — discovered that one of the firm's other employees, who we will refer to as Lil Timmy Cratchit, was getting a ride to work each day from his mother.

Oshja found out that Timmy had to ride to work with mother because his car was in the automobile repair shop. Apparently Timmy's car had an expensive transmission repair and the bill was more than he could afford at one time. Timmy was paying down on his automobile repair bill, but still owed approximately $2,000 before he could get his car back.

Oshja took it upon himself to solicit funds from Rogers Towers attorneys (all of whom are JBA members – 100 percent club) to help pay for Timmy's car and to surprise Timmy at the Rogers Towers' Christmas party.

After an email, Oshja was able to fully fund the remainder of the repair bill. The repair shop even agreed to provide a partial discount upon learning of Oshja's initiatives. In fact, there was more than enough so the surplus was gifted to Timmy as a gas card. Nice work Oshja.

The Ghost of Patriot Day

Our final story comes to us from The JBA Nov. 21 Patriot Day luncheon. This luncheon featured a keynote address by Steven Nardizzi, the executive director, CEO and co-founder of the Wounded Warrior Project.

At this same JBA luncheon approximately one year prior, JBA member Capt. Daniel K. Bean received the Legion of Merit Award presented to him by Capt. Richard K. Giroux.

Each and every act identified and discussed above involves a selfless act of kindness by someone who placed the needs of others in front of his/her own. Each of us possesses this same quality.

During this holiday season, remember these acts of kindness performed by your fellow JBA members. Don't be an Ebenezer Scrooge and don't give a membership to the Jelly of the Month Club (even though it is the gift that keeps on giving) and pass on kind acts and holiday cheer to whomever you can.

REMINDER: The new website is up and running. Remember to log onto Jaxbar.org and update your profile, and don't say Bah, Humbug. 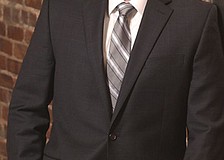 The JBA gives gifts to seniors 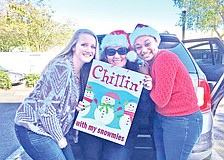 JBA Holiday Project: The most wonderful time of the year includes spreading cheer