After years in limbo, Palms Fish Camp is back

Heckscher Drive restaurant open for business after a 15-year journey that saw many deals with the city fall apart.

Many attorneys make a career out of unraveling convoluted legal puzzles and coming up with solutions crafted to meet the needs of the parties on both sides of an issue.

That’s what attorney Marc Hardesty of Hardesty, Tyde, Green & Ashton and two partners did when they took over the Palms Fish Camp project in November.

They’re in the midst of the “soft opening” of their restaurant with a full-service tiki bar, boat dock and kayak launch along Clapboard Creek at 6359 Heckscher Drive.

“The demand is unbelievable. We just swing the doors open and people show up,” Hardesty said Wednesday.

The partners were the solution to a redevelopment project that began in 2002 when the city purchased the property and struck a deal with the existing operator to keep the no-frills, old-Florida-style restaurant open.

That lasted about three years — and through disputes between the city and the operator over such issues as paying rent — in 2005, the two sides parted ways and the city tore down the dilapidated building.

The site was home to nothing but a sign proclaiming that a new restaurant was on the way until 2008, when the city finally began construction and then made a deal with a new operations group to take over the restaurant when it was complete.

With the building about three-quarters ready to open for business, the two sides ended up in court in 2012.

That’s where the project remained until about a year ago, when the city settled the lawsuit for $125,000 and then issued a request for proposals to find yet another potential operator.

Enter Hardesty and his partners, Marshall Adkison, owner of Adkison Towing, and Jay McKenzie, owner of the Sandollar Restaurant on Heckscher Drive a few miles east of the Palms.

The only respondents to the city’s request for proposals, the partners agreed to finish the build-out of the restaurant and complete the vision that began 14 years earlier.

The group signed a 20-year lease and began the final phase of construction in December. Hardesty said there are some tweaks still to be made, but the Palms is open for business.

“We think we’ve turned it from a sour note for the city into something that’s very good,” Hardesty said.

After a few weeks of opening the doors and greeting the customers who show up, the response has been positive for the concept based on North Florida products and a neighborhood atmosphere.

“What sets us apart is our fresh, local seafood like Mayport shrimp we buy right here on Heckscher Drive and we only book local bands,”  Hardesty said. “It’s also one of the few places where you can tie up your boat or kayak or Jet Ski and come in for lunch or dinner.”

While they were outfitting the kitchen, the partners found a deal on a wood-fired pizza oven they couldn’t pass up, Hardesty said, and that adds something to the menu not usually found at a fish camp.

“There aren’t many places on Heckscher Drive where you can get a pizza,” he said. 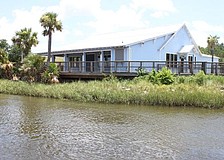 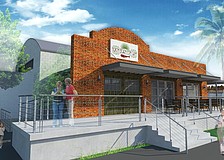 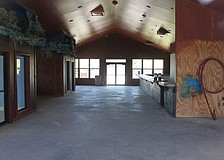 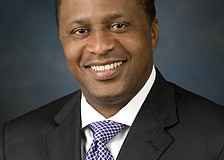 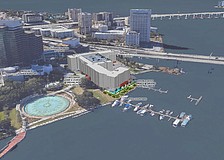