Moving in the New Year to spark Northbank development, the Downtown Investment Authority wants to take steps toward a riverfront convention center.

The DIA is scheduled to consider its first resolution of the year — 2018-01-01 — to dispose of the old City Hall Annex, County Courthouse and parking lot site on East Bay Street.

What it wants is a plan for a convention center complex.

The resolution states DIA will request proposals from firms for the development of a 350-room full-service convention center hotel, parking garage and public convention space on the site.

The proposal doesn’t include a cost, but the DIA commissioned a Convention Center Study completed in June 2017 by Strategic Advisory Group that referenced it.

The study identified the courthouse annex property as a site for the center.

Funding sources would need to be determined. The study listed financing models that included revenue or general obligation bonds, development of a convention center financing district, an increase in hotel taxes and the use of entertainment and ticketing fees.

The resolution states that the “city/DIA may be open to public participation on the Project” and is “open to receiving various financial arrangements for the Project.”

Developers are encouraged to identify any public participation that might be required.

Project information in the eight-page resolution states a new convention center, hotel and parking garage would “be an immediate enhancement to the financial viability and dynamism of surrounding facilities in the Urban Core and the Sports Complex, and to the City of Jacksonville in general.”

It said the DIA expects the project “will exemplify exceptional architecture that complements the vitality of downtown Jacksonville” and “function in harmony with, and support the activities and events of the Riverfront and the Sports Complex.”

In the scope of services, the DIA said a development agreement and other applicable agreements and leases would govern the project with the chosen developer.

The developer and its team members, such as architects, financing partner, engineers and operator, would be responsible for all aspects of the project through final occupancy with approvals from the city/DIA.

Among other deliverables, proposals must provide details on the financial strategy, conceptual depictions and a timeline.

It’s not an immediate project.

Once the notice is issued, it would take at least 60 days for responses. After an evaluation committee makes its recommendations and the DIA selects a bidder, the deal would be negotiated by the DIA and administration then and sent to the Office of General Counsel to draft the redevelopment agreement and legislation for City Council.

Also, the vacant buildings must be demolished for development to begin. DIA CEO Aundra Wallace said any efforts regarding demolition of the properties – at 220 and 330 E. Bay St. – will be handled by the city Public Works Department.

The city has been working on a Request for Proposals for the demolition.

Last year, Mayor Lenny Curry earmarked $8 million in his 2017-18 budget to demolish the buildings.  He said last summer more than one party had expressed interest in developing the land.

“The development of a new convention center should be delayed until such time as it is part of a destination plan that will improve the overall attractiveness of Jacksonville as a convention, meetings, and major indoor event destination,” the study said.

DIA meets at 2 p.m. Wednesday in the eighth-floor boardroom at the Ed Ball Building at 214 N. Hogan St.

A move to develop a convention center at the site has been expected.

In 2011, the Jacksonville Civic Council Northbank Redevelopment Task Force recommended that the courthouse and City Hall Annex site be developed as a convention center and exhibition hall.

The city moved most of the legislative and executive branch departments 20 years ago to the St. James Building at 117 W. Duval St. Some departments and the State Attorney’s Office used the space for several more years.

A convention center hotel is one of several proposed projects along the Downtown riverfront.

On the Northbank, Jacksonville Jaguars owner Shad Khan wants to develop the Shipyards site and a decision is expected soon on the unfinished Berkman II condominium. Meanwhile, the Jacksonville Landing is tied up in litigation.

On the Southbank, developer Peter Rummell wants to develop The District, a project in negotiations. 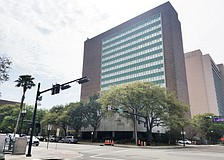 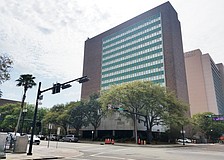 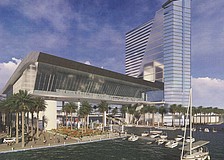 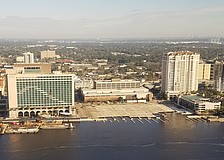 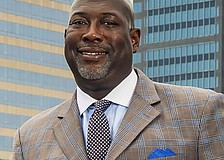