City will pay Alabama-based BBVA $450,000 to buy out the remainder of its lease.

The city reached the final lease termination deal it needs to close the last business at The Jacksonville Landing as it prepares to demolish the shopping center.

In the deal reached Wednesday, the city will pay Alabama-based BBVA $450,000 to buy out the remainder of its lease. The bank will vacate the Landing by Oct. 28.

The buyout comes as Hooters, the Landing’s last restaurant, closed. On Monday, furniture and signage were removed. A sign on the door said it closed June 2.

BBVA’s lease with Jacksonville Landing Investments LLC was scheduled to expire Jan. 31, 2021, and contained a renewal option extending through Jan. 31, 2024.

The city inherited the original lease terms when it bought the Landing through a $15 million legal settlement with Jacksonville Landing Investments, a subsidiary of Sleiman Enterprises.

Before the agreement with BBVA, the city reported that $871,333 was spent from $1.5 million the City Council allocated in March for lease buyouts and tenant relocation assistance.

City Director of Public Affairs Nikki Kimbleton said May 31 the city did not anticipate any remaining assistance money after the BBVA agreement was reached. However, the $450,000 bank buyout leaves roughly $178,000 unspent.

The legislation also reserved $1.5 million to demolish the structure. The city received seven bids from contractors ranging from $978,000 to $2.77 million.

With Hooters leaving, the city is making plans for a phased demolition, leaving utilities and access for BBVA so the bank can continue operating through October. The city’s specifications for the demolition project state work can begin at the site 10 days after a contractor is selected. 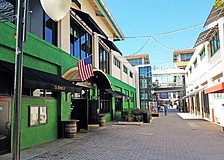 Fionn MacCool's intends to close Saturday night at the Landing 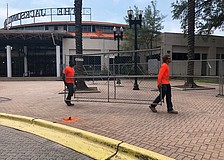 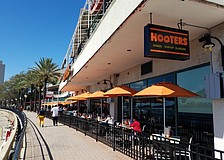 City says it could cost $590,000 to terminate leases for two restaurants at The Jacksonville Landing 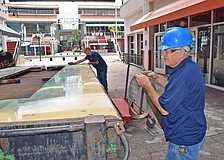 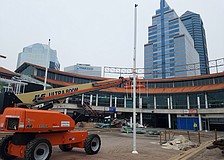 Demolition approved for The Jacksonville Landing