Board vote clears the way for city demolition of Berkman II

A decision by the Jacksonville Building Codes Adjustment Board on Jan. 13 allows the city to take over the demolition of the Berkman Plaza II high-rise Downtown.

The board voted 6-0 to deny building owner PB Riverfront Revitalization of Jacksonville LLC’s appeal of the city’s condemnation order.

The board has deferred the issue three times since October to give a PB Riverfront and its subsidiary more time to address issues that the company says caused repeated delays of a planned implosion.

“So, immediately tomorrow (Jan. 14) we’re going to finalize a contracting process, and we have talked to the company about prospective dates,” Hughes said after the meeting.

Because the city considers Berkman’s structural condition a public safety risk, the contract with Pece of Mind will be an emergency procurement.

Hughes said he’s “fairly confident” they can get the job done in February.

In a letter sent Jan. 6 to city Director of Community Affairs Charles Moreland attached to the bill, Pece of Mind President Steve Pece referred to a payment dispute with the Berkman II developer/owner.

Hughes said the city received correspondence Jan. 13 from the project’s first contractor, Arwood Inc., similar to those from Pece of Mind and CDI, but he was unable to say if it dealt with money owned.

Pece of Mind outlined safety concerns in the event of extreme weather because of the building’s partial demolition that began in the summer.

In August, Pece of Mind halted a manual tear-down because of structural and safety concerns and sought city approval for an implosion.

Pece warned the city that his company would end the contract and undo much of the implosion preparation work if PB Riverfront’s account is not brought current.

“This is a unique situation since we had to weaken the Berkman II structure to prepare it for the implosion and the building is only rated for 130 MPH wind load,” Pece wrote.

During the meeting, Building Code2 Adjustment Board member and licensed structural engineer Tamara Baker said photographs of the partially demolished Berkman do “not depict conditions that are indicative of complete structural integrity.”

She also referenced a structural engineering report received by the city that prompted the August work stoppage. It warned weathered tension cables could cause more “pancaking” or collapse of Berkman floors 15 to 18.

“I can tell you that the existing condition of the building does not meet 130 MPH wind flows,” Baker said.

He said the company had to deal with the contractor’s tight schedule and mitigate dust risk to the nearby Maxwell House coffee plant and adjacent The Plaza Condominiums at Berkman Plaza and Marina.

After the vote, Beeler said his company shares the goal of bringing the Berkman II down safely but will weigh its legal options.

“Essentially, what they are doing is usurping our right to manage our business under our contract,” Beeler said.

According to Beeler, the development company’s contracts with Pece of Mind and CDI are active and PB Riverfront would consider lawsuits if the contractors execute contracts with the city.

Beeler said he is concerned the city’s intervention could go further.

“Our biggest concern is that the city essentially uses all of this as a tactic to take title the property,” Beeler said.

Hughes said Jan. 12 that the developer would retain ownership of the Berkman II property.

However, the city could issue a lien to require Jacksonville Riverfront Revitalization cover the taxpayers’ demolition cost.

Beeler said, despite the board’s ruling, Jacksonville Riverfront Revitalization intends to finish the liability insurance purchase in hopes of imploding it independently.

“Until today this owner had never disputed that it was an unsafe structure, which is what the city cited him for,” Hughes said.

“We let this protract out because he continued to promise on delivery of doing the demo. We were very open to giving him every opportunity.”

Hughes said the secondary benefit of speeding up the implosion is removing a Downtown riverfront building that has been a blight to the area’s appeal and economic development for nearly 14 years.

Work on the Berkman stopped in 2007 after the collapse of a parking garage that killed one person and injured others. 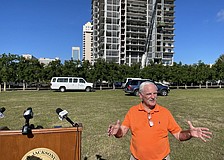 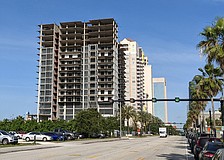 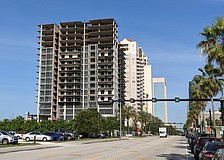 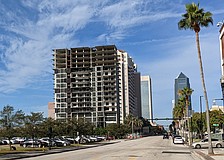 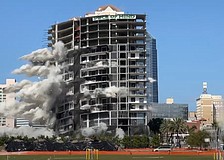