When James Batteh left work Friday, he closed the door — lobby gates, actually — on a 14-year career as the owner of the Atrium Café & Grill in Downtown’s Wells Fargo Center.

New owners bought the business Sept. 30 and opened this morning with the same staff and menu, but not Batteh, who had stayed for the transition.

“It’s been an emotional two weeks,” Batteh said Friday afternoon, not long before he went home where he knows he is needed more. He is caring for his father, 83-year-old Jimmy Batteh, who is ailing.

“I’ve been praying on it. My dad needs a lot more attention these days. I wanted to be around when I needed to be for my dad,” he said.

Jimmy Batteh is well-known Downtown as the 20-year owner of the Bay Street Café along East Bay Street. He sold it in 2012 and retired.

Customers remember his vision limitations didn’t interfere with his ability to recognize them by voice, their usual orders and details about their families.

James Batteh opened the Atrium in 2002, anchoring the lobby at the 1 Independent Drive tower.

He continues to own and run the smaller Centurion Café and Grill at the CIT Building in Deerwood South off Southside Boulevard.

“It gives me a little more time and I just felt it was a good time to sell,” said Batteh, 50.

A longtime customer and his wife bought the Atrium — Scott Follick, manager of service delivery & support with The Energy Authority Downtown, and Marina Follick.

Follick’s brother, Steven Follick, has relocated from Pennsylvania to run the business. A restaurant and food-service veteran, he’s spent the past two weeks learning the Atrium’s systems and Batteh’s business model.

The Follick brothers both have experience in the industry, having worked for major chains.

Scott Follick won’t be working at the café.

The Follicks wanted to buy a restaurant, but not a bar. They hired a business broker and looked at opportunities from St. Augustine to North Jacksonville.

Meanwhile, Batteh listed the Atrium with a broker.

Follick said his broker brought the deal to him. “This one was easy,” he said of the decision.

The Atrium is open Monday-Friday, services a commercial office building, has a staff and is established. It services customers in the tower as well as patrons from Downtown and others.

The Follicks and Batteh closed on the transaction Friday, Sept. 30, and opened Monday, Oct. 3, with Batteh at the register.

Scott, Marina and Steven Follick met with the staff a few days before the deal closed.

Wells Fargo Center owners notified tenants by email the morning of the sale.

“James would like to extend his gratitude to you all for supporting his business throughout all of the years here at Wells Fargo Center,” it said.

Steven Follick and his wife moved to Jacksonville from Pennsylvania right before the closing. “I’ve been in the back getting to know the process,” he said Friday afternoon.

The brothers said they will try to improve on an already winning concept.

“Changes will come but there are no changes tomorrow,” Steven Follick said.

The Follicks intend to keep the nine employees.

“The staff is really great. We are very fortunate,” he said.

The purchase brings the brothers back together in business. They haven’t worked together since 1992 at Houston’s Restaurant.

Batteh said he wishes the Follicks the best, and he wants customers to know it was been “a pleasure and an honor” to serve them.

Asked his plans for this morning, Batteh said he didn’t know. 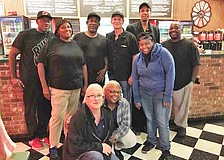 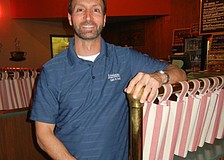