Republican Jimmy Hill and no party affiliate candidate Omega Allen also are in the race.

The unitary election is March 19. If no candidate secures 50 percent of votes plus one, the race will be decided in a May 14 runoff election.

Brosche met Monday with Daily Record editorial staff to discuss economic development, changes to the Downtown Investment Authority and her vision for the urban core.

When it comes to Downtown, Brosche said the city is missing out on what she called “low-hanging fruit.”

“I think it’s the tiny things that convey that even we don’t care about Downtown,” said Brosche, who contends that some of the smallest issues contribute the most to a negative perception that doesn’t match reality.

She said improving lighting at night and addressing cleanliness would be easy cures for those perceptions.

“We’ve got businesses that are taking risks to be here,” Brosche said.

“It’s hard to remain committed when there’s so much going on here that’s causing some of our businesses to say, ‘Gosh why am I doing this?’,” she said.

The lack of adequate lighting is what she says sets Jacksonville apart from other cities.

Another issue is Downtown’s grid of one-way streets that she says creates confusion and presents safety problems for pedestrians.

“We’ve got one-way streets Downtown that turn our roads into highways at certain times of the day,” she said.

Those one-ways, she said, also can harm business because they may not be as accessible to drivers compared to a traditional configuration.

She said funding for more lighting and to alter streets is available in the Capital Improvement Program budget, but is not a priority for the current administration.

Brosche said business owners also complain about a growing homeless population and how that deters customers from coming to the core.

“We need to have a caring and compassionate response to our homeless brothers and sisters,” she said. That could include more funding for day shelters or for short-term housing.

Brosche suggested the city create stronger partnerships with mental health providers since that’s a common issue in that community.

Brosche was critical of what she perceives to be the Downtown Investment Authority’s lack of independence from the mayor’s office.

The agency was established in 2012 to oversee Downtown development and comprises nine board members. A CEO oversees the DIA staff.

Brosche contends that “like a lot of boards and independent authorities, it is an extension of the mayor’s office,” saying it is troubling to have the mayor’s chief of staff, Brian Hughes, serving as interim CEO as the agency seeks a permanent hire.

“I will not be stacking independent authority boards with my friends,” Brosche said.

“I want people to utilize their expertise to ask great questions, to challenge what’s happening and to make sure that it’s right for all of Jacksonville,” she said.

Brosche said if elected, she would not usurp independent agencies like DIA or dictate to board members that her own agenda be adopted, as she believes Curry’s administration does now in private.

She said an independent DIA is better because “we need people focused on Downtown development, regardless of who the mayor is.”

She also questioned a strategy that she says focuses too much energy on bringing development inward as Downtown’s surrounding neighborhoods – Brooklyn, LaVilla, Springfield, Riverside and San Marco – continue to grow.

“There are some that are challenged with the thinking that activity is just going to spread because you do it in Brooklyn or maybe at the Shipyards to the historic Northbank,” she said.

Brosche said the DIA needs to pursue more infill development for the urban core in addition to growing surrounding neighborhoods.

She said the current business model is the opposite of how other cities operate – where activity and investment in downtown pays for the growth in outer areas.

“Our formula isn’t in that direction now,” she said.

To do that, Brosche said she would propose more funding for the DIA to offer grants and incentives, to add lighting and to possibly pay to alter one-way streets.

When an agreement was announced between the city and Sleiman Enterprises Inc. to place the Jacksonville Landing in the city’s possession, Brosche’s campaign issued a statement questioning the timing of the deal.

The plan includes the city buying Sleiman out of a 56-year lease agreement for $15 million, plus $1.5 million to address tenant subleases and relocation costs.

Brosche said Monday she takes issue with the city planning to spend $1.5 million to demolish the structures without a public development strategy.

She said potential voters she’s spoken with are against creating a Downtown riverfront park in place of the Jacksonville Landing. Last year, the mayor’s office released renderings showing an urban park with some mixed-use elements at the site.

The administration called it a “launching pad for ideas” and not a set plan.

Brosche said any plan should engage the riverfront and provide pedestrian access.

She said the trend of demolition along East Bay Street is another concern.

“The wisdom of knocking down buildings before we know exactly what’s going to happen there seems to be questionable,” she said.

The city is demolishing the old City Hall Annex and Duval County Courthouse to prepare those sites for development.

The DIA is expected to solicit bids from developers this spring, with the goal of having a deal in place by year-end.

Without naming a suitor, Brosche said she’s heard the Landing property already is being shopped to what she called a “well-known” developer.

“It wouldn’t surprise me to see a chain of events that lead it in that direction.” 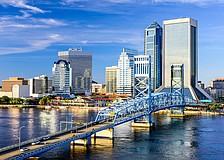 Give DIA more power? Plan could be tough sell 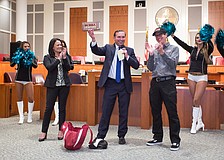 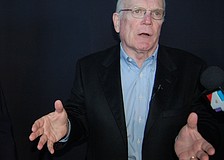 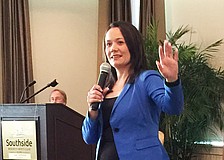 The Cawton Report: DIA may offer LaVilla property for development 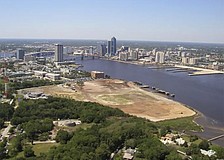 Deal to buy land for The District back where it started