The Las Vegas candy, cocktails and food concept boasts of its celebrity sightings.

The company said April 14 it will open at the 4910 Big Island Drive restaurant. The projected opening is in January.

Special features include an Instagram feature cafe in the front; indoor-outdoor dining and a bar with operable doors to a large outdoor patio with a trellis and lighting; and a large video wall. There will be a flower and candy wall.

It provided no further details.

“I think it will be super successful,” said Kelly Pulignano, vice president of The Shopping Center Group.

She and The Shopping Center Group partner Stephanie McCullough represented the landlord, Hines, in the lease deal.

They said the Town Center area continues to grow with residential, office space and a new hotel.

“The demand continues to increase in this area in general due to the growth, and a unique restaurant offering is always in demand,” Pulignano said April 12.

They said they have been talking with Sugar Factory since the fall.

They referred questions about the opening date and investment to Black Star Hospitality Group, whose concepts include Sugar Factory.

McCullough and Pulignano said they expect the property to be renovated.

Although it appears to need updating, the sugarfactory.com website says that it operates 19 locations in the U.S. and several internationally.

Its Florida sites include Orlando, Miami and in the Tampa Seminole Hard Rock Hotel & Casino.

Michael Stern with EDGE Realty Partners in Dallas and Daniel Solomon with Katz & Associates in Miami-Fort Lauderdale represented Sugar Factory, according to McCullough and Pulignano.

Stern and Solomon have not responded to emails for comment.

The Sugar Factory concept will be expanding.

Black Star Hospitality Group says it oversees more than $100 million in revenue and investment through current and future venues, including Sugar Factory.

The blackstarhg.com site says it has a more than 15-city exclusive deal with Sugar Factory that will be announced.

Sugar Factory’s LinkedIn site says the company made confections part of the popular culture and turned its Couture Pops into a designer accessory, with stars such as Britney Spears, Drake, Kim Kardashian, Eva Longoria and others photographed with the sparkly lollipops.

As an example of how Sugar Factory operates, the Sugar Factory Tampa at the Seminole Hard Rock Hotel & Casino opens at 11 a.m. daily and closes at 11 p.m. weekdays and 1 a.m. weekends.

The 120-seat full-service restaurant features the brand’s signature confectionery with a 4,000-square-foot, floor-to-ceiling candy wall with more than 500 types of candy, including bulk and novelty items and its “world-famous Couture Pops.”

The pops come with a “diamond”-studded handle that can be refilled with pops in flavors such as champagne, watermelon and pina colada.

There also are milkshakes that start at $14, sundaes and other desserts.

An extensive specialty cocktail menu online includes $39 drinks, such as a raspberry watermelon mojito and a classic watermelon pina colada, and $17 drinks such as a chocolate mudslide martini and Grape Crush.

Prices are higher at the Miami location on Ocean Drive, with specialty cocktails listed online at $19 to $43.

Sugar Factory hosts parties, weddings and other events, as well.

“Sugar Factory’s selection of this location speaks to the strength of the Town Center submarket as one of the premier retail and restaurant destinations in the region,” Pulignano said.

Sugar Factory said it is “The Most Instagrammed Restaurant in the United States” by Food & Wine Magazine.

It says other locations include a goblet bar and retail location at the Miracle Mile Shops inside Planet Hollywood Resort & Casino in Las Vegas, retail stores at the Barclays Center in Brooklyn, Union Square in Washington, D.C., and at McCarran International Airport at the D Gate.

The brand also says it will expand into more domestic markets in Mall of America in Minnesota and in Faneuil Hall Marketplace in Boston.

Brio Tuscan Grille closed Jan. 24, 2020, in The Markets at Town Center. A Brio spokesman said then that several factors could have contributed to the closing, including commercial changes in the area around the restaurant and lack of traffic in the restaurant.

It closed before the pandemic shut down much of the country, especially affecting the restaurant and hospitality industry, in March 2020.

Brio Tuscan Grille leased the building, which is owned by Hines. 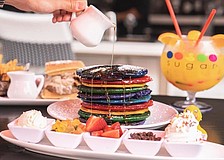 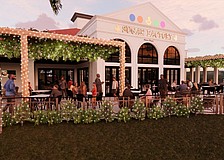 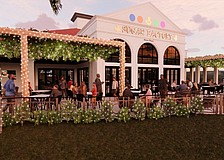 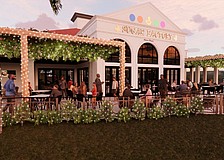 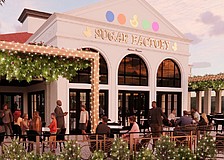