The Downtown Investment Authority deferred a vote Sept. 15 to finalize bid terms for the riverfront land on Bay Street.

The Downtown Investment Authority deferred a resolution for a month to approve terms to remarket and rebid the former Duval County Courthouse site on Bay Street.

The delay will push back the DIA’s timeline to award a development contract for the vacant city-owned riverfront land at 330 E. Bay St. into 2022.

The DIA board was scheduled to vote Sept. 15 on updated development terms and bid scoring, but staff requested at the beginning of the meeting for action to be deferred until October.

DIA CEO Lori Boyer did not immediately return a phone call Sept. 15 to comment on the delay.

The board voted in August to end an 18-month negotiation with a New York City-based developer Spandrel Development Partners LLC for a $136 million, mixed-use multifamily retail project at the site.

Boyer told board members that the DIA’s contracted real estate consultant on the project, CBRE, agreed to the timeline extension.

The deferral would push CBRE’s site premarketing to mid-October ending in mid-November. DIA staff wanted it to be from Sept. 15-Oct. 21, Boyer said.

The board would then vote on a legally required notice of disposition to put the property on the real estate market in mid-November and close before Christmas.

Boyer said the board could evaluate and award a bid in early January.

According to Boyer, this timeline would be less flexible because DIA staff wants to complete its award before it starts to market the private development parcels at Riverfront Plaza, the former Jacksonville Landing.

DIA hopes to complete contract negotiations with architectural firm Perkins & Will Inc. in early October to design the public park at the center for Riverfront Plaza, Boyer said at the meeting.

The DIA selected the company July 22 after a design competition with two other firms.

“We don’t want the two things on the street at the same time,” Boyer said.

“We don’t want them competing against each other, and we want to know what the results are of one so we can use it to formulate the other.”

On Sept. 9,  the DIA board Retail Enhancement and Property Disposition Committee held a workshop and approved requirements for the new RFP that focus on mid-rise or high-rise mixed-use multifamily development but removes the annex site and submerged land from bidding.

If approved by the full board in October, the RFP would eliminate a requirement from the first The Ford on Bay RFP that 80% of a proposal’s Bay Street frontage be retail.

Instead, the committee agreed with DIA staff and CBRE that 35% of the street front be “activated” with retail, urban open space, office or private uses for the multifamily residents.

The committee wants the scoring process should reward bids that include Bay Street retail.

During the workshop, Boyer suggested asking developers to provide ground-floor space that could be converted to retail when the market can sustain it.

Another change is Courthouse Drive along the riverfront. The DIA wants the city to retain it as a public park or open space, unlike the last RFP that allowed developers to incorporate it into the private bids.

CBRE’s recommendation that multifamily residential, riverfront retail and hospitality still would be the best use for the site did not change from the 2019 RFP.

The committee agreed that any RFP should have clear requirements for riverfront retail and dining. 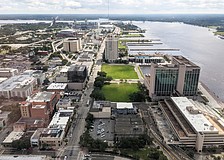 DIA board approves The Ford on Bay bid timeline, criteria 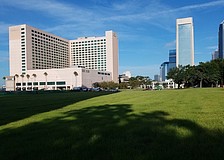 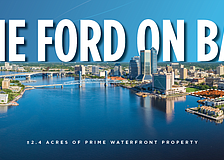 CBRE releases marketing info, timeline for The Ford on Bay 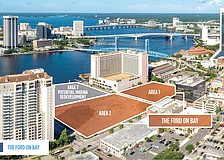 DIA ends negotiations with The Ford on Bay developer 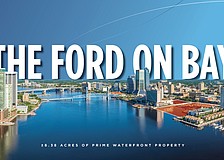 DIA terminates Spandrel negotiations for The Ford on Bay site