Design features high ceilings and spotlights that focus on produce

Dave Rinaldo, vice president of the Aldi Haines City Division, said by email Thursday that an opening date is not confirmed.

Aldi wants to renovate 20,266 square feet in the former Bed Bath & Beyond store at 9317 Atlantic Blvd.

No contractor is listed for the $900,000 build-out, which comprises about 12,500 square feet for the sales area and the rest for the vestibule, offices, freezer and cooler space, restrooms and back-of-the-house functions.

It’s the sixth Aldi store identified in the area — with three open and now at least three more planned.

The Germany-based discount food chain operates at 9041 Southside Blvd. in Jacksonville, in St. Augustine and Middleburg. It is building a store in Town Center Promenade near St. Johns Town Center and in West Jacksonville along Normandy Boulevard near Interstate 295 and Memorial Park Road.

Aldi also is considered a potential tenant for Oakleaf Corner in Southwest Jacksonville.

Aldi will build from the ground up in West Jacksonville and at Town Center, while the Regency store is second-generation space.

The new stores, he said, also feature more space for customers’ favorite products, including fresh and organic produce, the liveGfree gluten-free product line and the SimplyNature line of products, which Aldi said are free from more than 125 artificial ingredients and preservatives. There also is a new full line of baby products.

The stores also are built with energy-saving refrigeration and LED lighting.

Nancy Sumner of The Shopping Center Group LLC, the firm that represents Aldi’s landlord at CB Square, said previously there was a void of grocers servicing the Regency area other than Wal-Mart.

She said the housing density and demographics in the area lend themselves to a grocer and predicts Aldi will be successful.

The company recently said it plans to open 650 stores across the U.S., expecting to operate almost 2,000 locations by the end of 2018.

As previously announced, Aldi will invest more than $3 billion to pay for land, facilities and equipment to open those new stores.

Businessinsider.com said the chain debuted its new design in October at a Richmond, Va., store, and that it looks almost identical to Whole Foods’ new cheaper chain of stores called 365 by Whole Foods.

The news site said the new Aldi looks similar on the outside to existing Aldi stores, but inside the lighting is softer and the aisles wider.

Spotlights create a focus on the fresh produce section, which is larger than in its older stores. There also is a large refrigerated produce section, including space for pre-made dips and soups.

The news site said that while the older stores stack items on top of each other in cardboard boxes, the new stores feature eye-level shelving.

Rinaldo did not have more details about any remodeling plans for the existing three stores in the Jacksonville market.

The new designs will face a market dominated by Wal-Mart.

The Shelby Report, a trade publication, says that Wal-Mart accounts for 31.8 percent of the industry’s North Florida and South Georgia market share, followed by Publix with 28.6 percent and Jacksonville-based Southeastern Grocers with 22.6 percent.

Aldi said in a news release that it was embarking on the remodeling program while continuing its plans to open new stores. 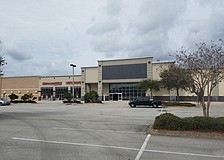 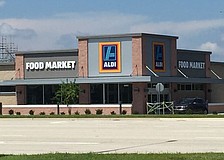 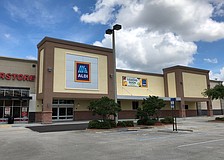 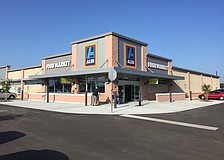