When you enter the offices of Bedell, Dittmar, DeVault, Pillans & Coxe P.A., you immediately walk into history.

The Jacksonville law firm’s Downtown building at 101 E. Adams St. is a city landmark, built in 1905 with a donation from Andrew Carnegie for the Jacksonville Free Public Library.

However, the Bedell Firm’s history goes deeper than that.

“Right after the Civil War, Horatio Bisbee, a carpetbagger from up north, moved to Jacksonville and set up a law firm,” said John DeVault, managing partner of the firm.

Bisbee later partnered with George Bedell to form Bisbee & Bedell, and the firm grew from there into one of Florida’s leading litigation firms.

The firm’s reputation was stamped when George’s son, Chester, joined long after Bisbee was gone to form Bedell & Bedell in 1927.

“Chester was regarded by many people as one of the great trial lawyers of Florida,” DeVault said.

Chester Bedell joined the firm as a 21-year-old and actually was admitted to The Florida Bar without completing law school. Because of that, it has become a tradition for attorneys at the firm to not show off their law degrees, DeVault said.

“Nobody hangs a diploma” in their offices, he said.

There are no longer any Bedells at the firm but the tradition they started remains.

“The practice then and the practice now is limited to trial work,” DeVault said.

“We don’t have any continuing clients,” he said. New clients come to them seeking representation for criminal and civil matters.

“It’s more interesting because you have different kinds of cases,” DeVault said.

The Bedell firm’s history includes many high-profile cases, such as representing the families of victims of the 1963 Roosevelt Hotel Fire in Downtown Jacksonville.

However, while the firm has no offices outside of Jacksonville, it has handled major cases in other Florida cities. In the mid-1970s, it successfully defended U.S. Sen. Edward Gurney in a federal trial in Tampa, on charges that he accepted illegal payments from Florida builders.

“He was the first sitting U.S. senator to be criminally indicted,” said DeVault.

The Republican senator had gained notoriety as President Richard Nixon’s biggest defender during the Senate Watergate committee’s hearings. But a month before Nixon’s resignation in August 1974, he was indicted and even though Gurney was acquitted of the most serious charges, that marked the end of his political career.

“We feel like given the opportunity, we can try any case,” DeVault said.

DeVault himself represented the city of Palm Beach when it was sued in 2006 by Donald Trump, after the city imposed fines for an oversized American flag at his Mar-a-Lago estate. Trump eventually dropped the lawsuit.

Over its 150-year history, the firm has survived challenging times, such as World War II. Chester Bedell and his brother, Nathan, both left the firm to join the military.

“I recall Chester telling me there wasn’t much left when they came back,” said Charles Pillans, one of the partners who joined the firm in 1966.

“He had to re-establish the firm from scratch,” he said.

The Bedell Firm moved into the library building in 1984. The building had served as the main branch of Jacksonville’s public library for 60 years before the nearby Haydon Burns Library opened in 1965.

After the library moved, the building housed city offices before Mayor Jake Godbold put a number of city properties up for sale in 1982.

The Bedell Firm, which was then located in the old Barnett Bank building, bought the former library and renovated the property for its office.

Besides not opening offices outside of Jacksonville, the firm has also resisted the temptation to expand its practice beyond litigation.

“By staying small you don’t have the same monetary pressures of a big firm,” DeVault said.

“We have good years and bad years,” he said. “None of us have gotten fabulously wealthy.”

The firm’s roster of attorneys over the years include seven who have gone on to become judges.

The firm also proudly points to four of its attorneys who served as president of The Florida Bar and 10 past presidents of The Jacksonville Bar Association. DeVault said serving the Bar and giving back to the legal profession is an important tenet of the firm. “We feel pretty good about that,” he said.

Another tenet is the collegiality of the office, which has helped the Bedell firm continue for a century-and-a-half, DeVault said.

“I think it’s the trust and camaraderie that has made it endure,” he said. 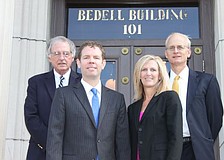